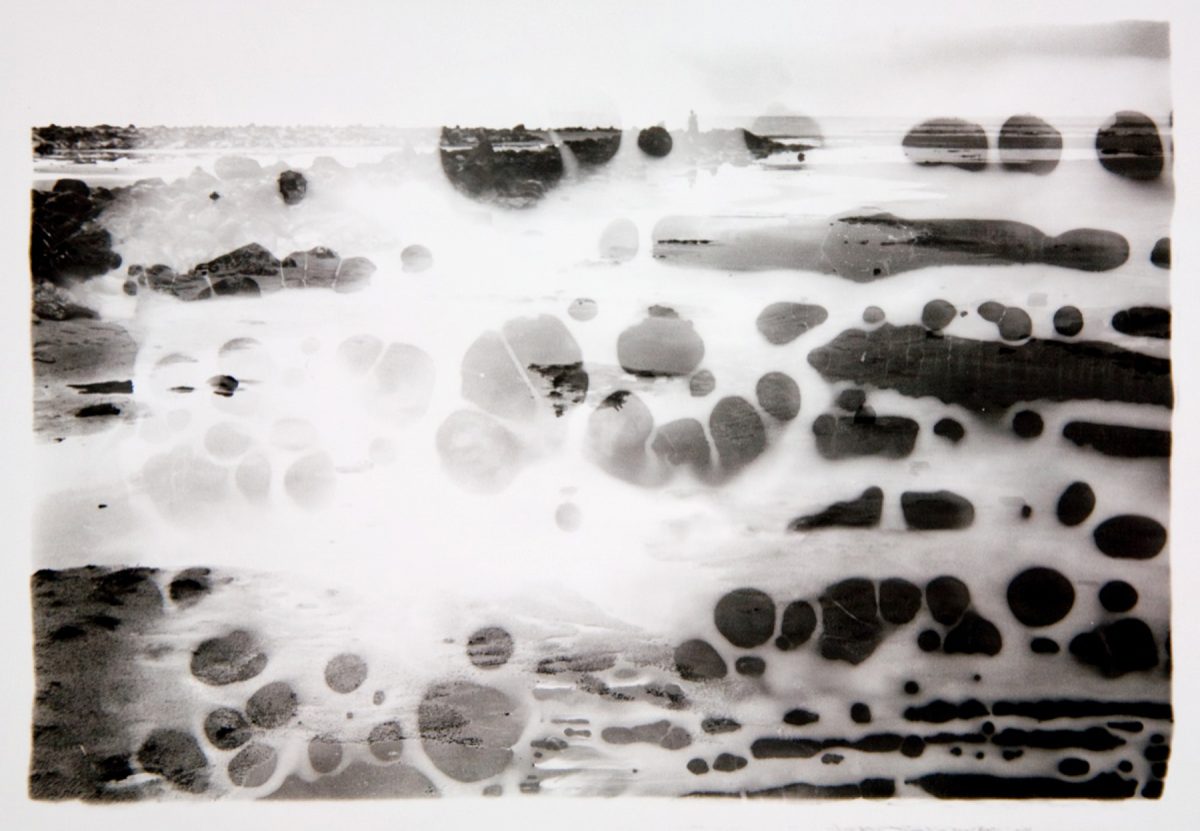 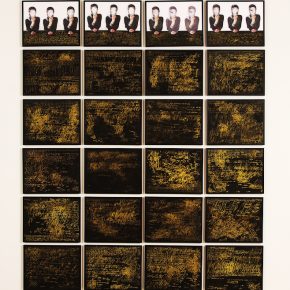 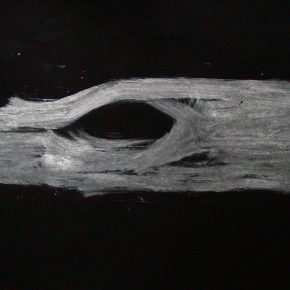 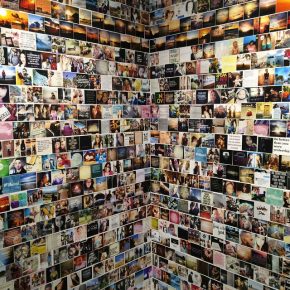 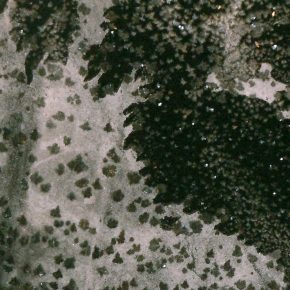 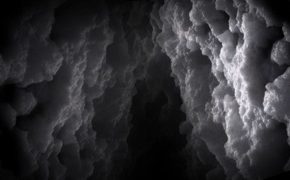 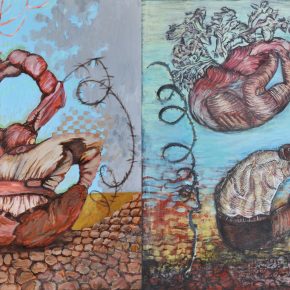 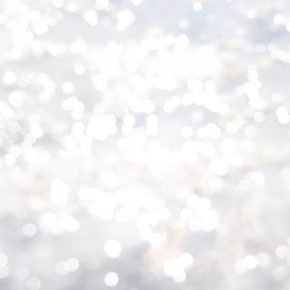 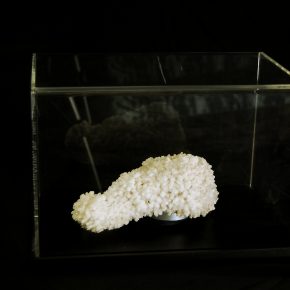 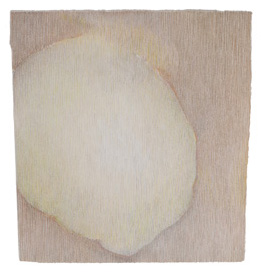 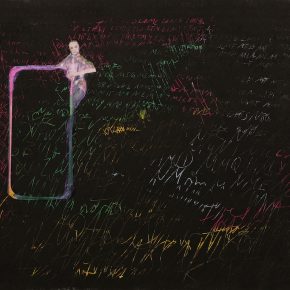 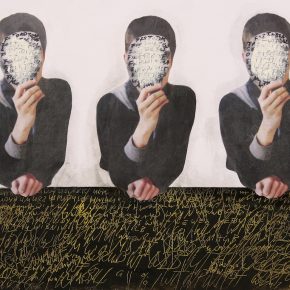 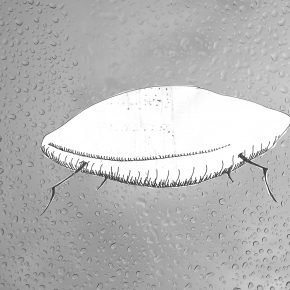 A Measure of Salt, the exhibition now up at the Granary Art Center, imbues the space with a sense of reverence. Walking into the clean gallery space of the old 1876 brick building, the first piece one encounters is a wrapped plaster Buddha figure sitting in a lotus position upon a dais of deep red steel farm machinery, offerings of Himalayan and Utah salt at its feet. The piece is “Salt Sutra,” by Frank McEntire, a tribute to several cultures which have sacred salt-gathering rituals. It is surrounded by four life-sized pairs of pants by Brian Snapp. Constructed of nautical maps and filled with salt, they stand in roughly the four cardinal directions in the four corners of the main gallery and titled, “Nearly North,” “Nearly South,” “Nearly East,” and “Nearly West.”

In the exhibition, salt is the subject, but it’s also the medium of the work. Curator Hikmet Sidney Loe has gathered 20 artists from New York, Los Angeles, and Utah who use salt from Great Salt Lake as a medium in the process of creating their work. The result is an exhibition that feels distinctly elemental.

Loe says that Robert Smithson was the first artist to really use the salt of Great Salt Lake, the salt itself, as a medium. Smithson, upon completing the Spiral Jetty at Rozel Point, stated that the work was made of “mud, salt crystals, rocks, water.” Loe, who has a book coming out next year about the Spiral Jetty and Great Salt Lake, explains that, “he’s the first one to talk about salt as a medium within an artwork. Previously people had drawn it, painted it, photographed it. But now it was a material that made up a work of art.” Loe had been gathering a list of contemporary artists working with salt and the lake, and realized about a year ago that she had the makings for a great exhibition.

The 20 artists Loe selected to participate in the show use salt in their work in a range of implementations both surprising and impressive. The range of photography, alone, actually, is surprising and impressive. Two of the photographers used salt from the lake to process their images. Kimberly Anderson created a gold-toned, salted paper print with an image of an evaporation pond run by US Magnesium on Great Salt Lake. Christine Baczek’s “Experiment 53” is a gelatin silver print in which she allows the reaction of photographic chemicals to work into abstraction, adding to and obscuring an image of the lake. The exhibition also features Amanda Moore’s pinhole images of the lake, Diane Tuft’s zoomed-in, infrared photograph of the Spiral Jetty, and Shonti Breisch’s luminous pigment print of a microscopic photograph of a salt crystal.

Three videos triangulate across the exhibition. Ashley Wilson’s “Salt and Sky” is a dreamlike meditation with lens flares, clouds, salt crystals, and then more beautiful twinkling out-of-focus lens flares. In her exhibition essay Wilson writes, “The Great Salt Lake is a place of mystery and awe. There are many bizarre and natural occurrences that only happen there or in very few places in the entire world. “ Colour Maisch’s physical, internal-feeling “Soft Animal” features a close-up, doubled abstraction of lake foam that has an intimate feeling, almost like a scope moving through a body. Los Angeles sound artist Alan Nakagawa’s “The Aleurone Layer and the Cosmic Understanding of Communication” approaches the industry, primarily salt extraction, of the Great Salt Lake with a semi-animated, silent, science-fiction narrative.

In addition to McEntire’s Buddha-like “Salt Sutra,” and Snapp’s fantastic cardinal trousers, the exhibition features sculptural work including Virginia Catherall’s knitted “Halite Choker & Salt Bracelet,” lacy, fragile, wearable pieces inspired by microscopic crystalline salt structures. There is Stefanie Dyke’s mound of 425 individually signed and stamped tiles, and Erin Coleman-Cruz’s textile and mixed media wall hanging that incorporates salt crystals made of tears. Coleman-Cruz writes, “If the salinity of the body—and thereby the make-up of tears—is akin to that of an ocean, metaphorically the body is part emotional sea.”

Chauncey Secrist’s sculpture, “Salt Lake Salacia,” is an object shaped like a large summer squash, but made entirely of salt crystals. Secrist created the piece as a kind of icon for/to the Roman goddess of saltwater, Salacia. Secrest writes that, “If Salacia were to take up residence in a landlocked area anywhere in the world, our own Salt Lake might seem like prime real estate. It is an area that, for me, has become kind of holy. It is a place to which I make periodic pilgrimages to take photographs, to connect with nature, and to experience a kind of peaceful isolation and stillness in a frantic world that is in perpetual motion.” In many of the essays in the exhibition catalog, artists write about Great Salt Lake as having a personal sacred resonance.

Loe says that for her the through-line of the show at its most basic, though, is about process. It wasn’t obvious to her until the show was up, and she was walking through the exhibition that she realized that as a curator, she’s very interested in process. “Every single artist had a really different process that they were very much in love with and doing,” Loe says, and that process was, “indicative of who they were as artists.” Perhaps creating an exhibition around a subject as elemental as salt reveals something elemental about the artists themselves. And while that manifests as an emotional depth in some and a mystical bent in others, for some it’s mischief. For others, beauty.

The exhibition also includes several beautiful pieces by printmakers, as well as several drawings. In the upstairs loft space of the gallery just one artist is featured. Eleven pieces by Holly Simonsen line the three walls of the space, while a plinth bearing a buffalo bone from Antelope Island sits in the center. Simonsen calls her pieces pre-alphabetic glyphs, created after Simonsen kayaked from “Lee Creek to Antelope Island, Fremont Island, Saline, Promontory, Carrington, Stansbury, Salt Mounds, Evaporation Pools, Black Rock, and back to Lee Creek.”  The glyphs are the result of her experience of 11 different conversations with women at 11 points along the southern portion of Great Salt Lake. They are painted on black paper with a mixture of salt and breast milk, and for Simonson communicate the process of working backward into the elemental sources of language.

It is fascinating to move with the artists through their exploration of salt, and of the lake. The space is reverent, but also, when you get closer, irreverent. There is an exploration of the molecular structure of salt, as well as the vast, sweeping landscape of the lake. There is time, both the present moment, and the past that stretches to the furthest reaches of human imagination. There is the body in the landscape, the body as landscape, the salt as the body. Salt as medium, salt as muse, salt as process.