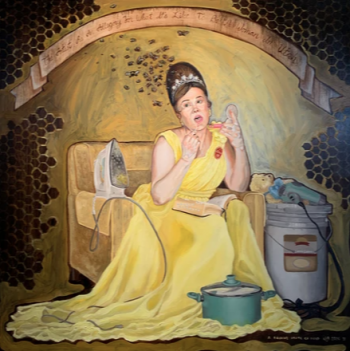 What does it mean to be a woman in Utah?  In the exhibit Rogue: Utah Women’s Voices, curator and artist Nancy Andruk Olson’s selection of works by Utah artists focuses on women’s relationships with their homes, nature, and with others. Olson’s stated purpose in the exhibition is sharing perspectives from many Utah women, tied together formally with the inclusion of pink in each piece. Many of the artworks also depict flowers, bees, and household tools, a nod to gender roles and stereotypes in the state.

The exhibition is meant to celebrate Utah womanhood and bring attention to gender disparities in the state’s art institutions. In her statement, Olson gives several statistics to bolster her argument that Utah does not fare well in equal representation of women in gallery spaces. Though 60% of artists in Utah are female, she says, the 12 leading galleries in Utah represent more men than women. For some galleries, the disparity is as high as 70% male to 30% female; in others, it is a near-even split with a slight preference for male artists. In long-term museum collections, Utah artists fare much worse. The UMFA’s recent acquisitions are only 17% female. BYU MoA’s recent acquisitions have been 100% male. This is not to say there is no space for women in Utah art. One notable exception according to Olson is Relics gallery, which represents 70% female artists. 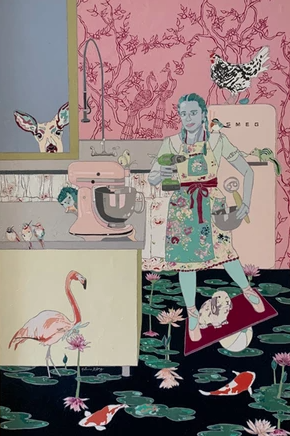 Rogue shines a light on the experience of Utah female artists. Perhaps the most traditional and expected painting is Kristen Holt Beitler’s “Beehive State of Mind,” which features a demure woman in a Belle-like yellow ball gown applying lip gloss and surrounded by implements of domesticity. Beitler’s self-portrait represents some of the niche aspects of Mormon culture, from the five-gallon bucket of food storage, to the open scripture “quad,” and the “I voted” sticker, probably a nod to the Church’s great pride in women’s suffrage. The image is a reminder of the incredible pressure many women in the majority religion in Utah feel to be the perfect wife, mother, and community members all while developing a selfless and humble attitude. And beautifully sculpted thighs. Along similar lines is Katrina Berg’s “True Peace is not a Lovely Façade, It’s Homemade,” in which an aproned woman balances on a beachball as she tries to accomplish household tasks.

Other paintings celebrate feminine strength and ability. Katherine Rojas’s “A Strong Lady” juxtaposes a crystal necklace against a hammer head. The figure stands in a power-pose, hands on hips, against a floral background. The flat, linear florals and geometric patterns around the edges of the canvas make this painting look like an Andalusian tile portrait, part of a folklore sequence where the next scenes will show the great works achieved by the hero.

Alongside these nods to Utah’s majority religion and traditional views of domesticity are other explorations of womanhood and gender roles, representing the diverse experiences of women in the state. Karalee Kuchar’s photograph “Beauty for Ashes” shows a figure moving through a field with a swath of pink overlaying brief moments of time in swirling energy. The piece highlights the ephemeral nature of gender roles and expectations, societal constructs that frequently change. Jean Richardson’s “Tumbleweed” and Ya’el Pedroza’s installation use natural and synthetic elements to create a connection between woman and the land — cultivating respect for womanhood goes hand in hand with creating an environmentally friendly, nonexploitative society. Pedroza uses scraps of old fabric, aspen logs, and precariously balanced papier-mâché rocks to simulate nature overcoming human refuse.

Another fascinating artwork is Amanda Michelle Smith’s “Women’s Lib.” This painted ceramic celebrates the power of womanhood in a fairy-tale type illustration of a woman slaying a dragon. As the heroine slices open the stomach of the dragon, the arms and legs of other women are visible, wearing the same shoes as the heroine. The heroine could be slaying the dragon to free other women, or she is freeing other parts of herself from the beast. 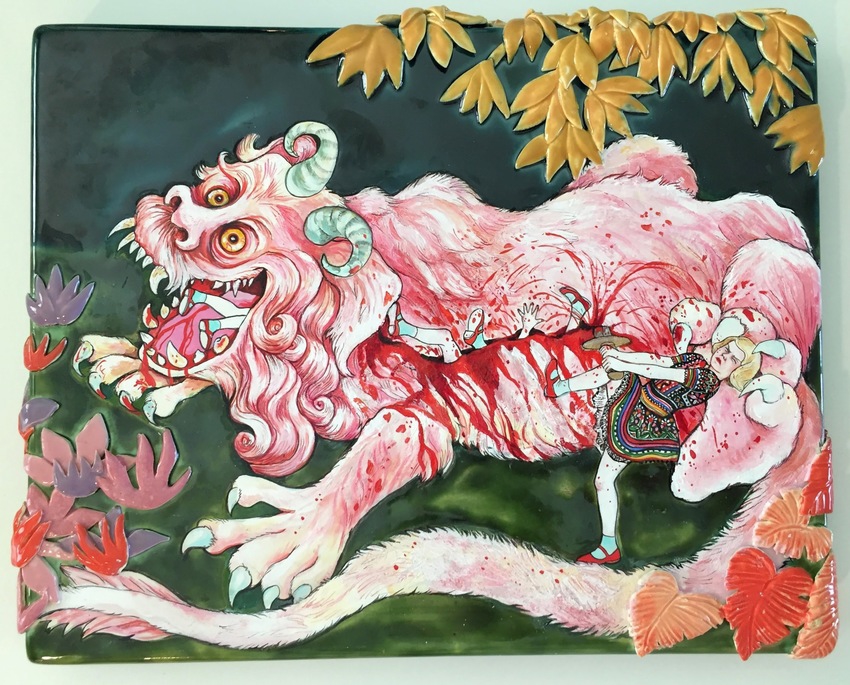 This exhibit is well-curated and beautifully features several women’s experiences and artwork. As a white, Utah woman myself, these artists spoke to many of my own concerns about my upbringing in the LDS church, my need to reconnect and feel one with nature, and the journey of becoming a strong woman in a conservative environment that does not encourage women to speak out or pursue their own careers. The concerns about unrealistic expectations on women in Utah and in the LDS Church are important and valid. However, in conversations about inclusivity and equality in the art world, we must include more indigenous women and women of color. Including more of the perspectives of artists of color, besides Katie Rojas, would have deepened the conversation.