A Faithful Version: Jeronimo Lozano at the Rio Gallery’s Only Light 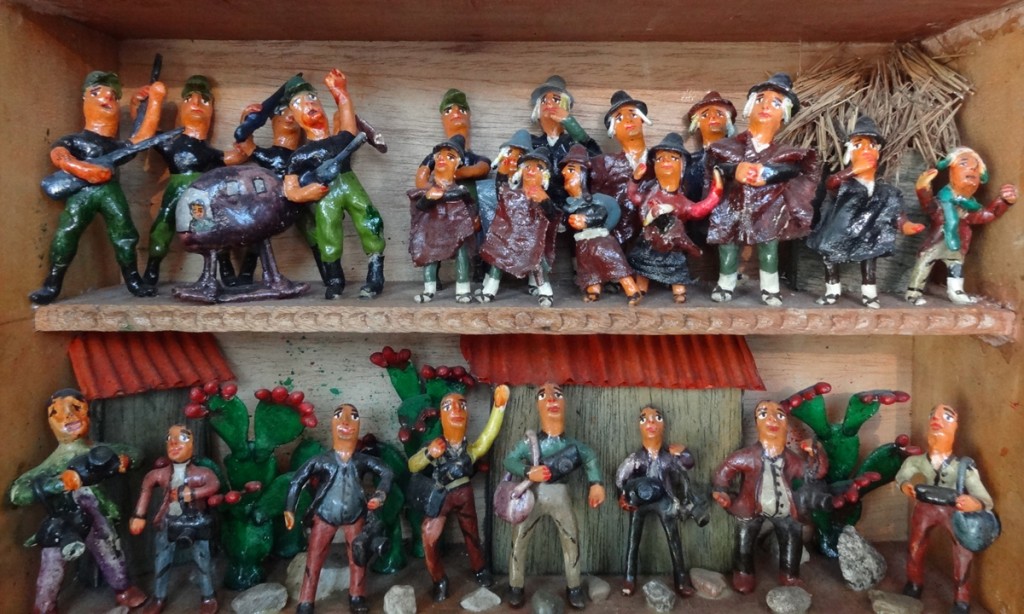 Forget Idealism. In the hands of an artist, hard truths can be made immortal. Goya’s “The Third of May, 1808” and Picasso’s “Guernica” continue to speak on behalf of murdered innocents long after convincing the world that it was the pretensions and excuses of their powerful, military butchers that were delusions. Yet one of the more disturbing facts of modern warfare is that instead of armies battling each other, today’s wars are fought by mercenaries who mostly kill defenseless civilians. There may be some justice, then, when an artist who redresses such atrocities does so using the indigenous art of the peaceful people who are the primary victims of mass-marketed war.

The carved and framed Biblical scenes and images of saints that stood behind medieval altars in time gave rise to small, boxed versions that were carried to the New World as aids in proselytizing. These retablos produced such impressions on Latino society that folk artists quickly adopted them, in the process transforming a pedagogical exercise into a part of their culture: lively, colorful, exuberant, visually evoking the environmental sensations of local life. When the box was opened, instead of a catechism, it contained confirmation of the value of life.

Today, while traditional retablos continue to be made, a handful of artists have updated their themes to include modern conflicts. Nicario Jimenez and Jerónimo Lozano have created metaphorical and literal ways to present external, negative impacts on their homeland. Lozano’s most influential work, “The Tragedy of Uchuraccay: The Killing Of Eight Peruvian Journalists,” is now on display as part of the Rio Gallery’s Only Light exhibition. In twelve narrative tableaus, it reveals what Lozano uncovered as he pursued the tracks of the murdered journalists, learning what became of them among the Uchuraccayanos, Bolivians who survive on marginal land in the Andes. In spite of their subsistence lives and small numbers, these Indios are closely monitored by those in power, for fear than a desire to overthrow their remote masters might somehow start up among them.

Journalists are outsiders. It wasn’t hard for the death squads to manipulate naive peasants into seeing the reporters who came to investigate official crimes as a threat to their livelihoods, then to use the locals’ participation as cover for further crimes. Lozaro builds his story powerfully, tableau by tableau, until the final horrors reveals the ultimate truth: death silences all but the witness, who must speak or truth will be lost.

Jeronimo Lozano’s “The Tragedy of Uchuraccay: The Killing Of Eight Peruvian Journalists” is on display at the Rio Gallery’s Only Light exhibition through February 14.