A Dialogue About Utah Art: Utah 2006 @ the Rio Gallery 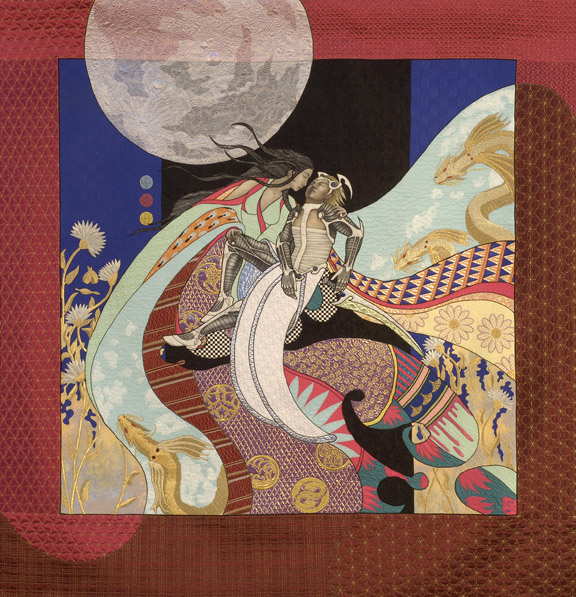 The following was originally published in Utah 2006: Fine Crafts & Photography, the exhibition catalogue for the Utah Arts Council’s Annual Statewide Exhibition on exhibit through November 2006. The show was juried by the authors. Tom Livesay is the director of the Whatcom Museum of History and Art in Bellingham, WA and Anna Marie Boles is the associate director of the Stewart Gallery in Boise, ID. Reprinted with permission from the Utah Arts Council.

AMB: Utah art is alive and thriving. Our goal as jurors was to assemble a collection that records the accomplishments of contemporary Utah artists. We looked for work that expressed skill and ingenuity . . .

TL: And creativity. I was immediately struck by the extraordinary variety of work submitted by artists throughout the state. As expected, there were many levels of artistic experience, but personally I was looking for that creative spark that separates and distinguishes the work of one artist from another.

AMB: That expresses a power —

TL: Right, but it had to possess more than a level of expertise and knowledge of the media.

AMB: It need to really transcend the media and energize my thinking.

TL: All of the above. People often ask “Just what are you looking for in a juried exhibition” and the response — at least my response — is a combination of honesty, visual merit, a creative surprise or two.

AMB: Tom, isn’t it a terrific time for artists? Our access to materials, processes, and technological innovation brings such vitality to current art making. Throughout this Utah exhibition, I found ample evidence of invention, humor, and that creative surprise or impulse that comes alive through an artist’s work. 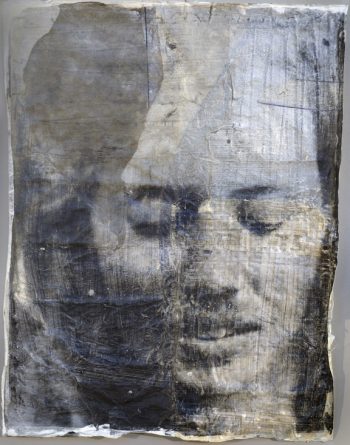 TL: Absolutely. I believe it might be useful to discuss some of the work in the show and give our opinions on what led us to these choices especially with the “Jurors Awards.” Jackie Brethen’s “Poles Within the Sand” is one of those photographs that refuses to rely upon traditional beauty. It deliberately removes any obligation the viewer would have to treat this as a precious series of images. The edgy, torn paper in “Beneath III” appears as a casual, discarded image, heightened by the informality of installation and the uneven surfaces. Yet it pulls you in and makes you wonder. It looks as if it were (but not quite) a billboard, ripped and tossed into the street for us to find. In that sense, it becomes a found object for the viewer.

AMB: A ripe imagination is definitely at play in Candice Rigtrup’s “The Secret Life of Shoes” photography. I loved her skillful marriage of concept, wit, and execution in this work. Rigtrup images reference sound. As the viewer turns each page, grommets click, animating the shoe images. Her use of the snapshot style allowed me to briefly travel their (the shoes) “secret life” between interior and exterior landscapes. All the while, there is a mixture of playfulness, sensuality, and unease. 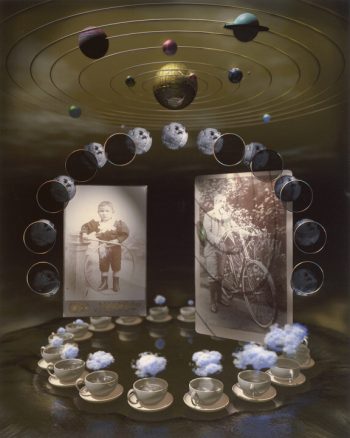 TL: At the other end of the photography spectrum is Edward Bateman. His “Cycles” show us — and confound us — with imagery as polished as a Surrealist painting. The work relies heavily upon skill, manipulation and scale. Think for a moment. Would this piece work if it were 8 x 10 inches? It successfully suspends our belief in what we see, creating a marvelous juxtaposition between the 19th and 20th centuries. The old and new stare at us with different forms of magic. One long dead, even the child we see, and the other bent on watching our faces as we ask, “How did he do that?”

AMB: Charlotte Warr Anderson and Aubry Kae Anderson’s fiber banner, “Starcorssed,” is a tour de force. The attention to detail on the front and back of the piece is extraordinary. Their concept was conceived with beautiful attention to details. Colors, patterns, and textures were carefully balanced at the same time surprising the eye with detailed, intricate stitching. It functions skillfully as a storytelling device alluding to rudiments that are historical and mythological. It is all you can do to keep your hands off of it.

TL: The crafts were so diverse. I can only point out a few that really caught my attention to the extent that the security guard threatened to frisk me before I left the building.

AMB: Sylvia Ramachandran’s minimalist sensibility is evident in her porcelain “Fledgling Feeder I and II” and “The Long and the Short of It.” These pieces all work together. Their elegant, organic shapes reference function, but emerge as sculptural forms with a mind of their own. Their durability questions, but they speak with a certain authority. Delicate, but strong, they ripple with life.

TL: Another object you cannot miss is Juule De Hann’s “Soaring Eagle Feather,” with glass beads on leather. It is an elegant work that successfully combines the tradition of beadwork with the modern imagery.

AMB: It is beautifully crafted. The tactile, complex surface demands the viewers touch while the eye is drawn to its’ subtlety of shading. I agree, Tom. De Hann’s imagery skillfully merges traditional shapes and concepts ina contemporary montage that demands our attention.

TL:
In addition to the Jurors Awards, there were other works of art that we found equally terrific.

TL: Look at the work of Tai Loc Huynh,”Early Stage,” who opted for the most primitive of cameras, the pin hole.

TL: There is a small object that you do not want to miss. This is a “Self Portrait” by Niki Bush, and it is by far the most completely honest work that I have seen in a long time.

AMB: So, dear viewer, just like us, you have your work cut out for you.

Utah 2006: Fine Crafts & Photography is on view at the Rio Gallery through the month of November.