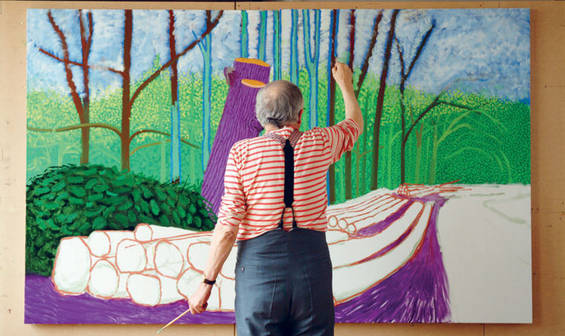 One of Britain’s most famous artists, David Hockney has survived the various “funerals” held for the art he has practiced for over five decades: painting. His works from the sixties and seventies – paintings of swimming pools and portraits of his friends – have become iconic images of the period, and his self-portraits, particularly those from the eighties, have always been revealing works that remind us why the intimate gaze continues to fascinate artist and public alike. Now in his eighth decade, Hockney continues to paint aggressively, creating mural size works, while experimenting with new media and exploring the art of previous centuries.

Since 2001, Hockney has had a second career as an art historian/provocateur, promoting (in books and television programs) his thesis that Renaissance artists like Caravaggio and Vermeer used the camera obscura to create paintings . His investigation comes not from any desire to denigrate old Masters, to whom Hockney has always been attracted, but from long study of their works and comparisons to his own experiments with technology, picture-making and the nature of flatness.

During that same period, Hockney has largely left Los Angeles, a town that became synonymous with the artist, choosing to return to Yorkshire to paint the landscape he grew up in.

This period is the subject of Martin Gayford’s publication A Bigger Message: Conversations with David Hockney. Chief art critic for Bloomberg News, Gayford is a personal friend of the artist and takes advantage of that intimacy to engage Hockney in a series of conversations, taking place over several years, about the artist’s work and practices, the history of art, the uses of technology and the joys of landscape painting. The book blends analysis, history and scores of the artists work (156 color reproductions) with anecdotes, snippets of conversations, text messages and emails, all in a handsomely produced volume that reminds readers of the sensual pleasures that the book’s e-cousin has yet to replicate.

Hockney has never been strictly a painter. He has experimented with photocollage, fax machines, ink-jet printers, stage design and more. These mediums are all part of the book’s “conversation” as Gayford’s book explores Hockney’s new fascination – drawing and painting with mobile devices, first the iPhone and later the iPad. He draws flowers on his phone every day and sends them to friends. “Anyone who likes drawing and mark-making would like to explore new media,” Hockney says. “I’m not a mad technical person, but anything visual appeals to me.” The book reproduces a number of Hockneys iPainting – usually quick and intimate, they can also be sophisticated and layered, with multiple broad washes and crisp lines.

Hockney has also experimented with Photoshop to continue his exploration of early masters. In a chapter called “Cleaning Claude,” Gayford discusses Hockney’s process of using computer software to “restore” Claude Lorrain’s “The Sermon on the Mount,” without actually touching the original painting. Hockney restores faded colors to his estimation of the originals, based on comparisons with Lorrain’s palette in other works, and is able to remove centuries of dark varnishes with the click of a mouse.

Lorrain, Gayford observes, was one of the first artists to practice painting outdoors, a passion that has consumed Hockney in his last years. From his experiments with the newest drawing technologies, Hockney shifts to the centuries-old tradition of painting en plein air. Setting up with a small traveling easel, or else a large contraption of multiple panels that must be delivered by his assistant, Hockney has been spending increasingly more time painting the landscape near his home in East Yorkshire. It is a landscape that is unremarkable in and of itself, but one that in Hockney’s paintings become vibrant explorations of light, space and perspective.

As with much of his paintings, as well as his examination of old Masters, Hockney’s preoccupation in these works has been space. “I’ve always been fascinated by pictorial space, because you can just invent it and make it work,” Hockney says. “That’s what terrific artists do – Picasso certainly could.”  His pool paintings explored the depth and flatness of a body of water, and his photographic collages were experimentations with the received notion that photography implies a fixed view, an automatic perspective. One of his arguments for Caravaggio’s use of a camera obscura is the immensely tight space of a painting like “The Entombment of Christ,” a space that would be achieved when piecing elements together with a camera obscura but would not occur if the artist were merely observing models in his studio. In his recent landscapes, Hockney has been drawn to winter scenes, where the tangled branches of trees both engulf the viewer and let them see beyond the flat surface of the canvas. Hockney’s most recent venture – what Gayford calls “high-definition Cubist movies” – employ nine high-definition cameras mounted on a moving scaffolding to create two-dimensional images that explore the interaction between space and time.

Picasso, one of Hockney’s artistic touchstones, remarked that one of his greatest strengths was being able to maintain a child’s curiosity into old age. Martin Gayford’s A Bigger Message shows that Hockney has been equally productive in his later years through his own need to look at and explore the world. The conversations in A Bigger Message took place over the past decade, but their range covers the scope of the artist’s career, as well as his thoughts on a variety of subjects including film, theatre and music, and artists like Rembrant, van Gogh and Henri Cartier-Bresson. The disparate elements collected over the decade are woven together by Gayford’s fluid prose, and given a warm touch by his intimate and perceptive (if at times reverential) tone.