The Vast Inexhaustible Domain of Life is Art 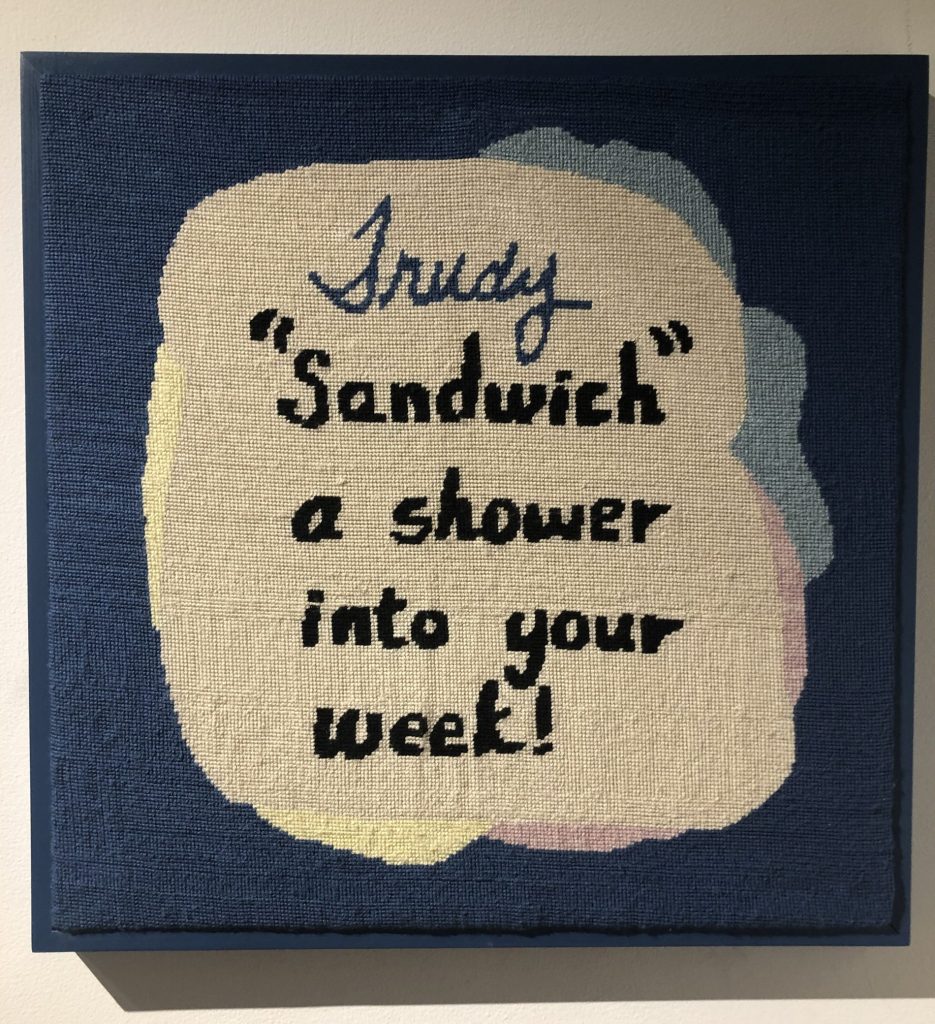 “Sandwich” a shower into your week!

At first, this sounds like rather tepid encouragement in the interest of hygiene, but further investigation reveals it to mean something altogether different. Trudy White, the late and sorely lamented grandmother of Alise Anderson — the Artist in Residence who titles this show My Grandma is a Meme — meant “shower” as in “baby shower,” “bridal shower,” and so forth. She apparently didn’t believe in passing up any excuse to bestow a group’s generosity on one of its deserving members. Apparently, in her opinion, everyone is a member, and everyone is deserving.

If organizing an endless succession of munificent celebrations was all she did, Trudy White would be someone worth knowing more about. But she did something arguably even more remarkable in her life: as much as possible, she kept everything. Many people can claim to have recorded their reading, their viewing, their travels and the sights they saw. Some artists write down what they draw or paint. Many cooks record the recipes they create. Fashionistas keep track of their clothes. There would be nothing unusual in a focused individual keeping track of what she most cares about. But who keeps track of all these things?

Psychologists have words in Greek and Latin to label such behavior, while the popular media have adopted the pejorative term “hoarding.” But anyone who’s threaded their way through a house full of old newspapers or empty tins cans stacked in rank and file till there’s no room for living knows there’s a difference between hoarding and collecting. Trudy White organized her stash so that she could find things. And share them. When Mark Twain died, no one was exactly surprised to learn that he’d kept every writing project, all the drafts whether finished or not, and from this a lot was learned about his working process. But he also kept every ticket stub, receipt, and casual bit of correspondence. One can imagine the author sorting through these, each bit of salvage a potential key to unlock a wealth of memory. Proust called his vast, slightly fictionalized memoir “In Search of Lost Time.” Mark Twain and Trudy White buttressed their lives against just such loss. 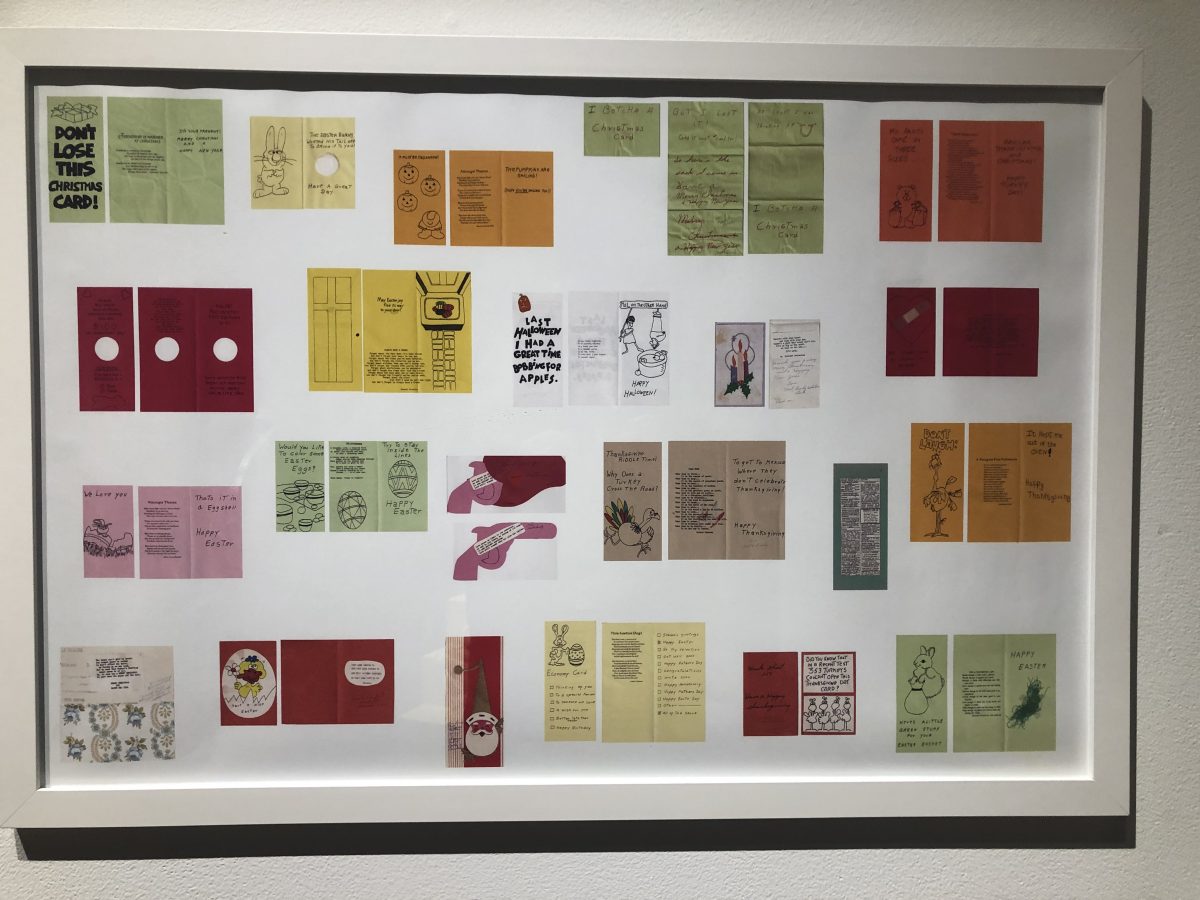 So, what might the recipient of such an archive do with it? There is probably some overlap between Grandma White’s collections and Alise Anderson’s recollections. But being an artist, for now Anderson has taken an idea from her own life. On a shelf outside the gallery, she displays one of what must be many volumes her grandmother assembled. This is documentation. Inside the gallery, meanwhile, Anderson creates her own assemblages, both collages and sculptures. There’s a sense about them that here Anderson is just getting under way. Nothing is titled. The choices seem arbitrary, ranging from tins to trousers. The collector spent an entire lifetime gathering this irreplaceable hoard, and it would be petty to expect one newly in possession to exhaust it in one outing. But for now, the tower of trousers is both an impressive essay, on the one hand, in cultural criticism and the history of style, and at the same time a powerful metaphor for whatever one sees in it: a family tree with no branches; growing up through the years; progress, or the lack thereof. 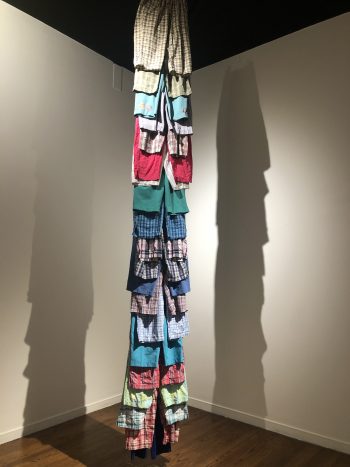 Installations like this often invoke more potential than they deliver, and that may well be their point, their content: the palpable sense that life is a vast and inexhaustible domain — not only more than we can know, but more than imagination can comprehend. A treasure trove of unmoored memories invites us all to explore our own capacity, our own power of invention.

All photos by Geoff Wichert, from the installation at the Utah Museum of Contemporary Art.