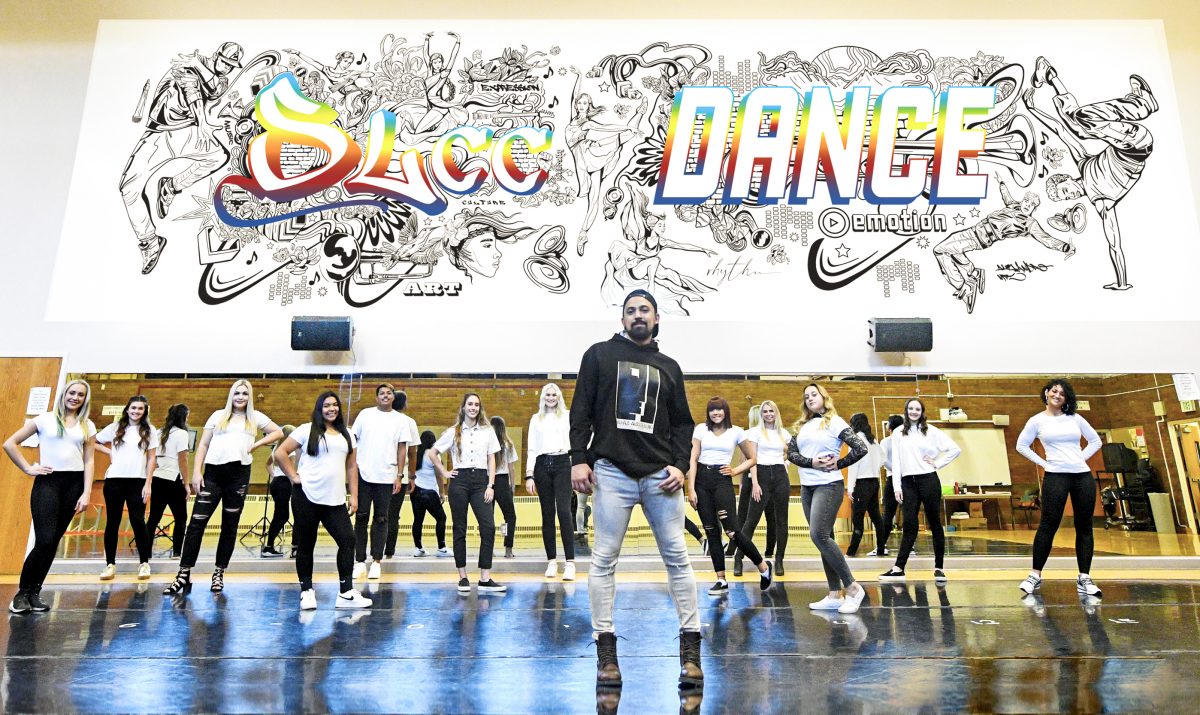 Most of the murals going up around town are outside (and one wonders what their condition will be in  a decade or so), but get out of your car and step inside and you’ll find large works going up in more climate-controlled settings.

One of the newest is Alex Martinez’ new graffiti-inspired work at the dance studio at Salt Lake Community College’s South City Campus. A native of Chicago, Martinez grew up in Jalisco, Mexico, where he began experimenting with different art forms at a young age. The 33-year old artist combines several media and styles to create innovative and ingenious designs. He enjoys traditional art forms such as drawing and painting, but also more modern approaches using different software to create Photography, Digital Illustration and Graphic Design.

For the SLCC mural, he collaborated with SLCC Dance Company director Whitney Harris. “[SLCC] wanted to use a graffiti theme with a lot of energy. Using these ideas as a starting point, I started drawing and designing. My original vision was a little less conventional but taking in mind it is a college we had to change and customize many items to make it work for the college. The mission and values of SLCC have always talked about inclusivity, community, equality. I wanted to include as many cultures as possible and they are represented with the different characters I created.”

The 14 x 50-foot mural is Martinez’ first and it has been a learning experience. “It was my first big project, so I learned many things. I wish I was able to make it more colorful. My client liked how it looked with the black outlines, and we decided to leave like that.”

The dance studio setting will have felt somewhat familiar for Martinez: he became a personal trainer three years ago. He also enjoys writing, playing violin, learning new languages, and learning new art forms such as metal sculpture and jewelry making. He has also created a YouTube channel on Heavy Metal.

You’ll find more of the artist’s work at:
https://alejandromtzdesign.myportfolio.com/home-1
https://www.instagram.com/alejandro.mtz.design/