Dance Persevering in Spite of the Present Moment 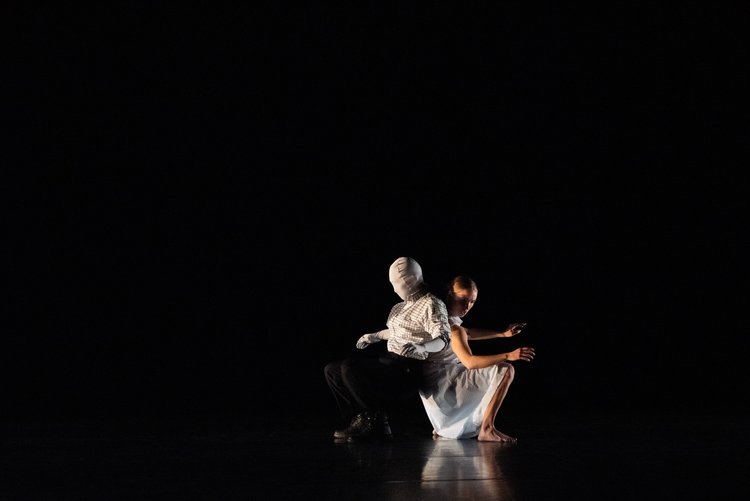 This week I took in two very different performances — one viewed online and filmed at the Rose Wagner, the other in-person at a tiny converted storefront. Both showcased emerging local choreographers.

RDT’s Emerge: Sounds Familiar took American music from the ’30s and ’40s as its inspiration. A mixture of works set on the company, on dancers from Utah Valley University and on kids taught in studio programs by company dancers, this evening is available to view through March 6.

801 Salon’s sixth edition, at the Vis storefront at 800 South and 800 East, featured solos by Meredith Wilde, Haley Stassia, Nina Wilson, Joey Anderson and Rachel Andes. My personal favorite was Andes’ My left or yours, which made clever use of the tiny allotted space and two built-in mirrors that faced the audience. The opening image, in which she writhed under the projected image of an egg breaking against her body, was followed up by footage in which the projector, shifted to face a corner, explored a nose and mouth at close quarters. Andes’ dancing, to music by Aretha Franklin, seemed to relate to the song’s narrative of a woman trying to please a man, without being tethered to it completely. The result brought up interesting questions about the intimacy of being in such a small space and the complicity of the audience in piecing together a narrative.

Where the salon offered youthful exploration, RDT’s output in Sounds Familiar gave us artists who’d been committed to their stylistic grooves for a bit longer. I was interested to see how Kareem Lewis’s solo, Nascent, put me in mind of other roles he’s performed, such as “Pegasus” from José Limón’s The Winged. Jonathan Kim’s work After Record End took the nostalgic trope of the evening’s theme and turned it on its head, using the maudlin music of the Ray Noble Orchestra to craft a surprising work of horror that borrowed images from René Magritte.

I found myself considering how both experiences were differently shaped by the pandemic. In RDT’s case, a move had been made to draw in resources from other parts of the community to keep the theater and all of its moving parts employed, even as the company made the difficult decision not to perform during the height of the Omicron surge. (The performance was originally scheduled for January.) The salon made me think about how desperately artists, particularly young ones, need opportunities to put work in front of people frequently in order to grow.

I think we’re far away from any answers about what, if any, discernible aesthetic trends will emerge from the pandemic. I see some possible answers in films I’ve seen online, like Jasmine Hearn’s video work that I mentioned in a past newsletter, which felt like a sort of organized diary of a year or more of rehearsing and directing rehearsal — masked and remotely — with no real end point in sight. Somehow the meandering quality of their film hinted at an acceptance of our ambiguous situation that I haven’t really been able to internalize.

The salon and RDT’s Sounds Familiar didn’t feel that way to me, and I don’t mean that as a critique. As interesting as it is to consider how dance might change because of this moment, it’s equally heartening to see dance persevering in spite of it.