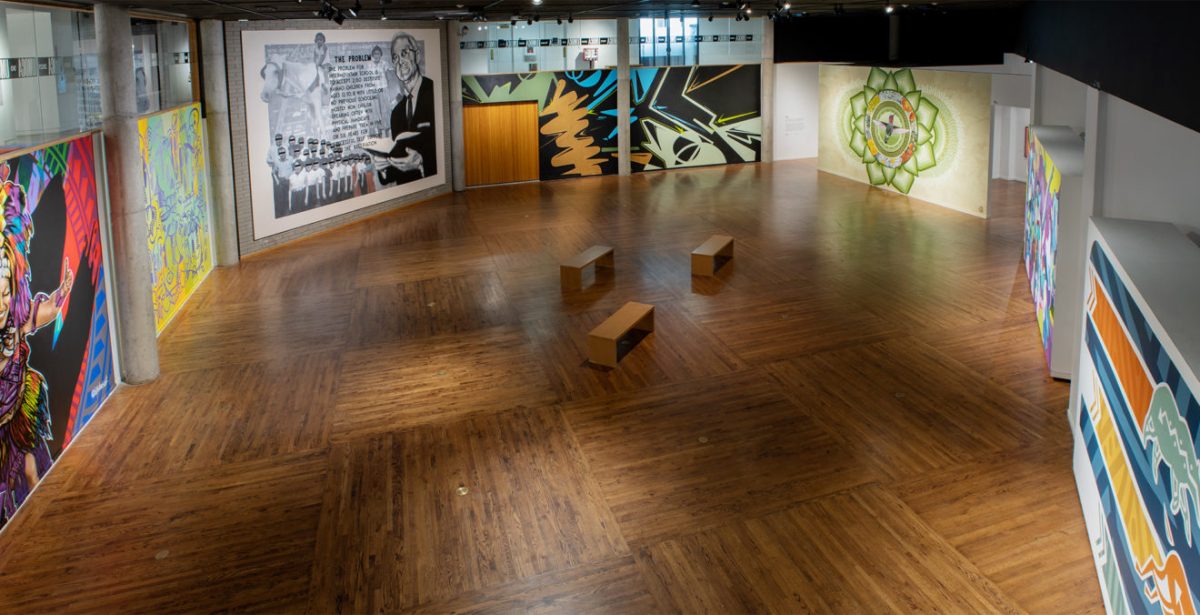 A view of “All Wall” in the Utah Museum of Contemporary Art’s Main Gallery, courtesy UMOCA

A drive — or better yet, a stroll — through the South Salt Lake City neighborhood just south of downtown, along Main Street, will treat the observant eye to mural after mural from one building to the next. Natural scenery has returned to this commercial district in the form of painted birds, fish, frogs, wolves, whales and other indigenous-but-displaced species. Nor does Main Street have a monopoly on looking like one huge, public art gallery; in fact, murals can be found all over town, in alleys and on the sides or back walls of structures: anywhere they can be seen by the public. Utility boxes celebrate causes or mourn lost members of our community. Actor and photographer Dennis Hopper looms in close-up over a parking lot, placed there by Jann Haworth, one of the prime movers among Utah’s many muralists. Murals also make visible a fundamental fact about art: like the data in DNA, art is passed down from one generation to generation. Often a single artist conceives and designs the large work, but a team of skilled assistants come together to complete it. Each mural is a microcosm of the history of art.

A mural may seem like a special kind of painting, a variation on the real thing, with its decorative frame and back wire seeking for a nail on which to hang itself. Of course in reality it’s the other way ‘round: the earliest paintings were made on the walls of caves, and for 200 centuries or more, that was painting. Then along came people like the Minoans, who decorated their walls with acrobats jumping over bulls, and the Etruscans, who painted cozy homes inside their tombs. Those images, like the wild animals in caves, survived because they were painted in durable materials on rock walls. Yes, at some point the Classical Greeks painted on panels, but we don’t know what their subjects were, because every one of those treasures was lost. The Greeks and the Romans mostly painted landscapes, gardens, cityscapes, and portraits on their walls. Medieval churches had painted walls until the invention of gothic architecture allowed stained glass to replace the walls with transparent art. Only with the Renaissance were panel paintings, which had migrated off the walls onto architectural altarpieces, adapted to use as portable paintings. Yet even then, the true pride and glory of those centuries was their vast acreage of painted murals in churches, palaces, and public buildings. We talk about the Sistine Chapel ceiling (a horizontal mural, after all), but several of the best-remembered Renaissance images were painted on the walls below, where they compete today for the attention of those who stand in line for hours to see the Michelangelos.

Nor has modern art abandoned the wall. Tourists in Mexico today line up to see the murals painted by Diego Rivera — now better known as Señor Frida Kahlo — and compatriots like José Clemente Orozco and David Alfaro Siqueros. During his career, Matisse painted many radiantly colorful domestic interiors, but some of his best-loved work came about late in his life, when he began to paint on actual walls. One thing that began feeding the popularity of mural art in the 20th century was street art, and it was only a matter of time before graffiti in Los Angeles went legit — in 1984, when the Olympics commissioned murals to be painted beneath freeway overpasses and similar high-visibility locations. L.A. continues to have one of the most vibrant public art presences anywhere, but it doesn’t take much looking to see that Utah has become a serious contender for leadership in outdoor, urban art. 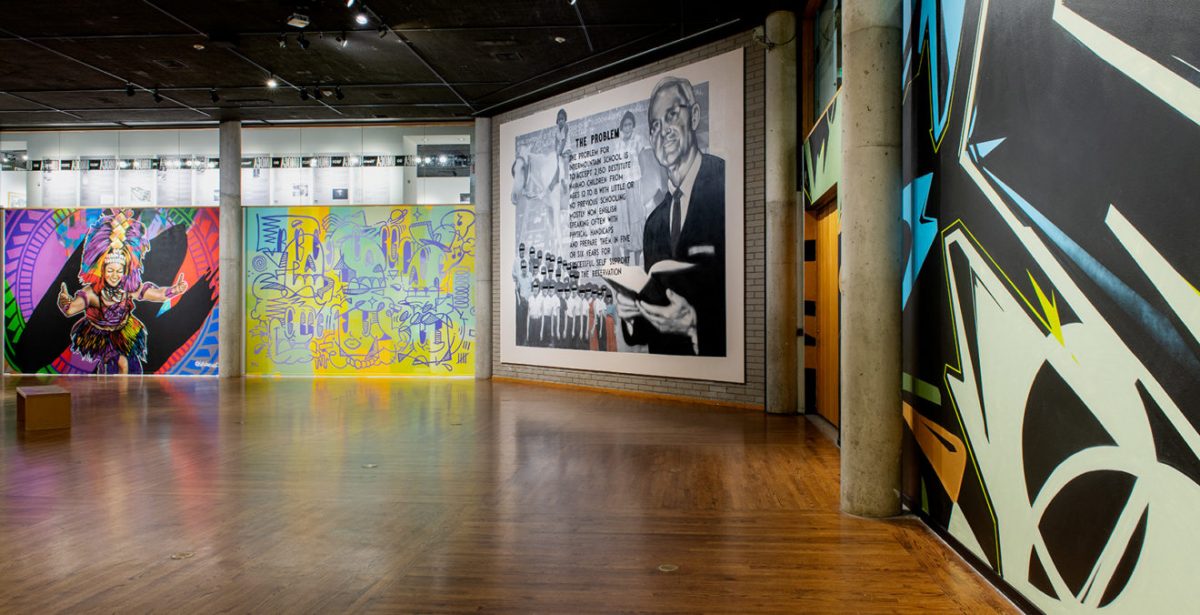 Thanks to the Utah Museum of Contemporary Art (UMOCA), we now have a rare opportunity to experience mural art in a way that virtually never happens. UMOCA, which is celebrating its 90th anniversary this year, has among its variety of exhibition spaces a main gallery sunk below street level, resulting in five expansive, windowless walls, on one or another of which an unusually large work of art may be hung, but which have probably never been exploited to their full potential. Enter curator Jared Steffensen, who has a particular interest in murals, and who divided the irregular polygonal space into seven areas and invited a disparate group of artists to fill each with a mural. The result is unlike any mural ensemble before: many, but not all conventional murals can be approached for a closer encounter, but here the art almost entirely surrounds the viewer, looming overhead and vibrating from wall to wall, producing an immersive effect in which the viewer inhabits the dynamic geometry and colorful imagery as though afloat in an optical sea. Each work can be isolated for appreciation, but the presence of six more energetic color fields, each the product of superb artistic choices, makes this the visual equivalent of an acoustic hall, which a symphony orchestra or a rock bank is filling with sound. We have that immersion in sound all the time, but the optical version is much more rare.

At the bottom of the stairs, Bill Louis’s elaborately costumed woman both dances into the room along with us and opens her arms in a welcoming embrace. Trent Call’s semi-figurative pen doodling, ranging across the spectrum from calligraphy to space-making squiggles, offers a crowd, perhaps a sextet of characters ,who harmonize like a jazz combo: each and every one on their own. Denae Shanidiin and Chuck Landvatter recollect the anguished suffering of the first people to inhabit this land, who understood it and cared for it and have had to fight just to survive, while (just outside the scope of this mural) later arrivals used up the water and brought down fire. The giant space and room’s errant energy collide zoomorphically in Ben Wiemeyer and Gailon Justus’s long wall. A conveniently-placed gallery entrance separates their explosive graphics from Roots Art Kollective (Miguel Galaz, Alan Ochoa, and Luis Novoa) and the gentle, contemplative mandala with a hummingbird in a garden at its center. Across another small interruption, Megan Arné’s three dense clusters of expressionistic fantasy illusions renew the clockwise motion, carrying the by-now-spinning viewer around to Jessica Wiarda’s emblematic bear, reindeer and roadrunner. It’s impossible to tell how much these artists may have collaborated on their respective visions, but they seem to work together just enough to keep it all together, yet not so much as to tie it down.

As the text that accompanies the work makes clear, murals can work any number of wonders in a community that shares them. A good place to start to experience their power is in this sadly temporary display at UMOCA, which should be part of every arts education. 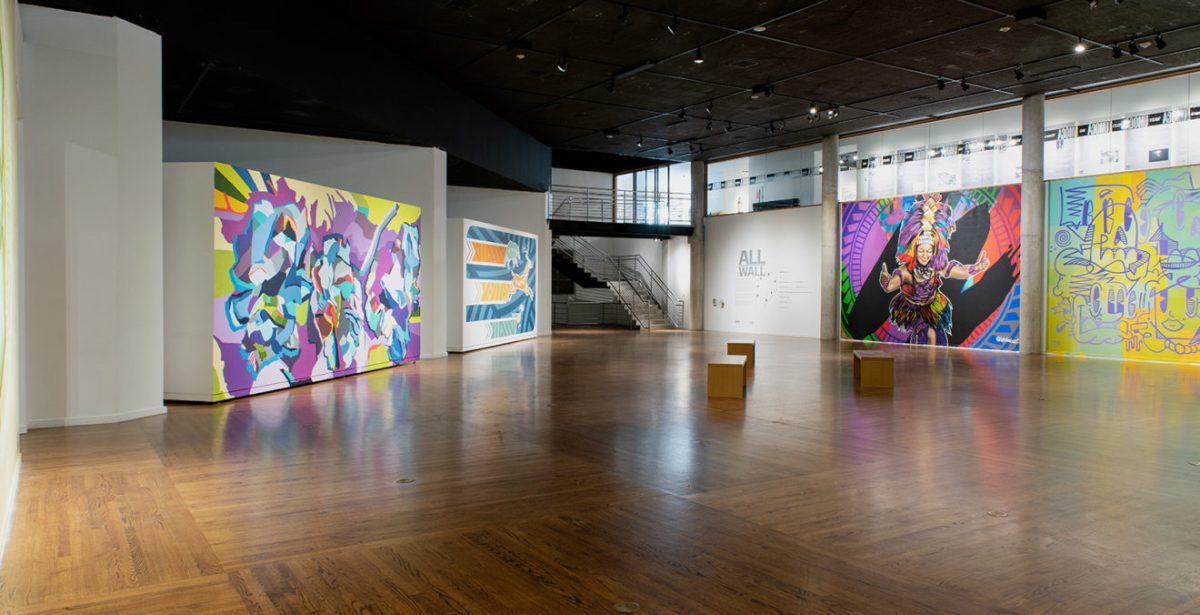 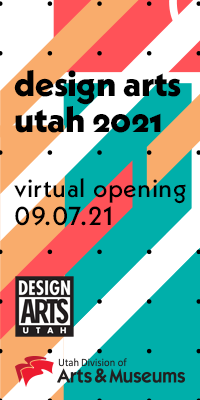 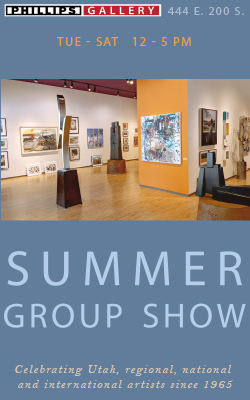 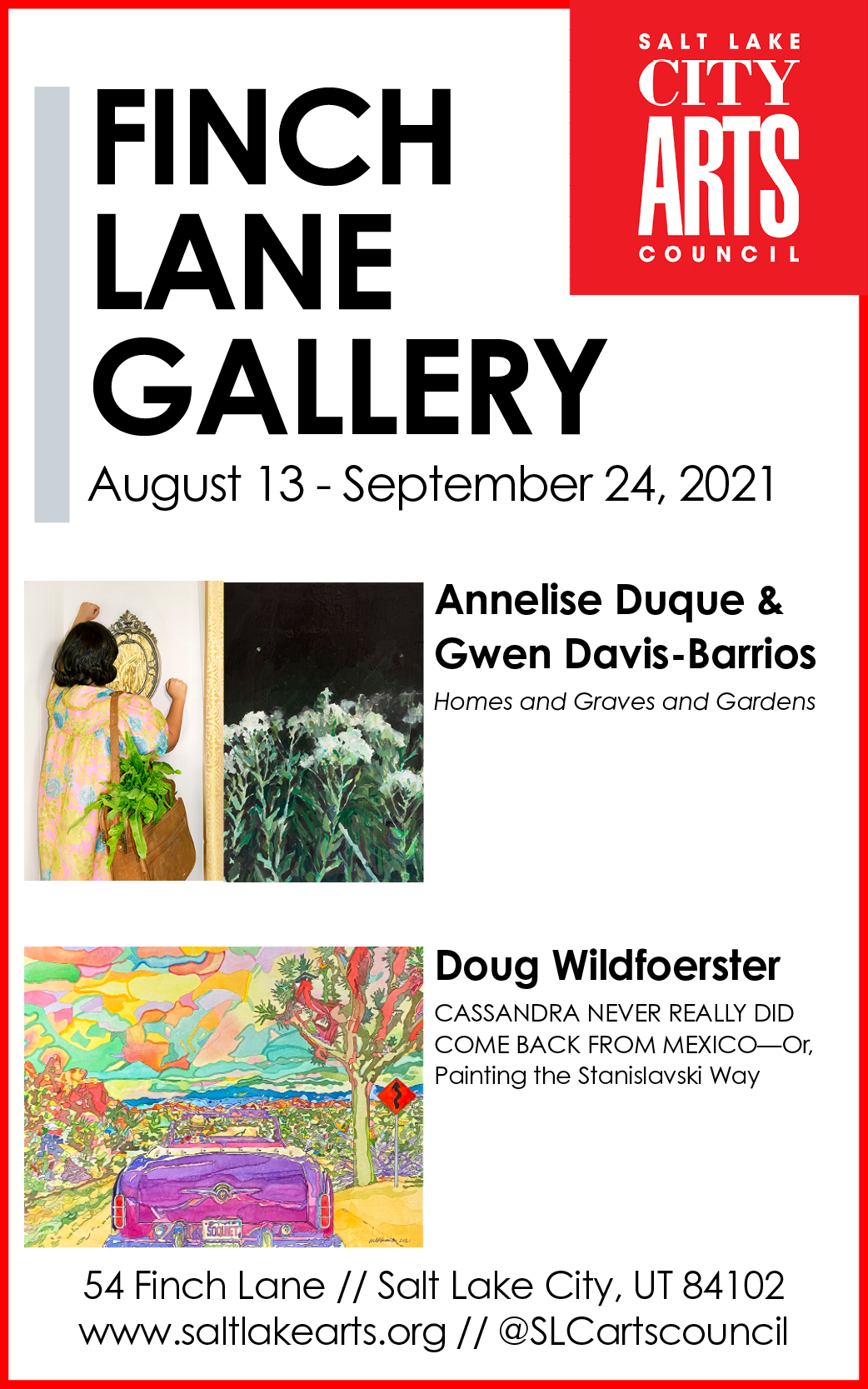