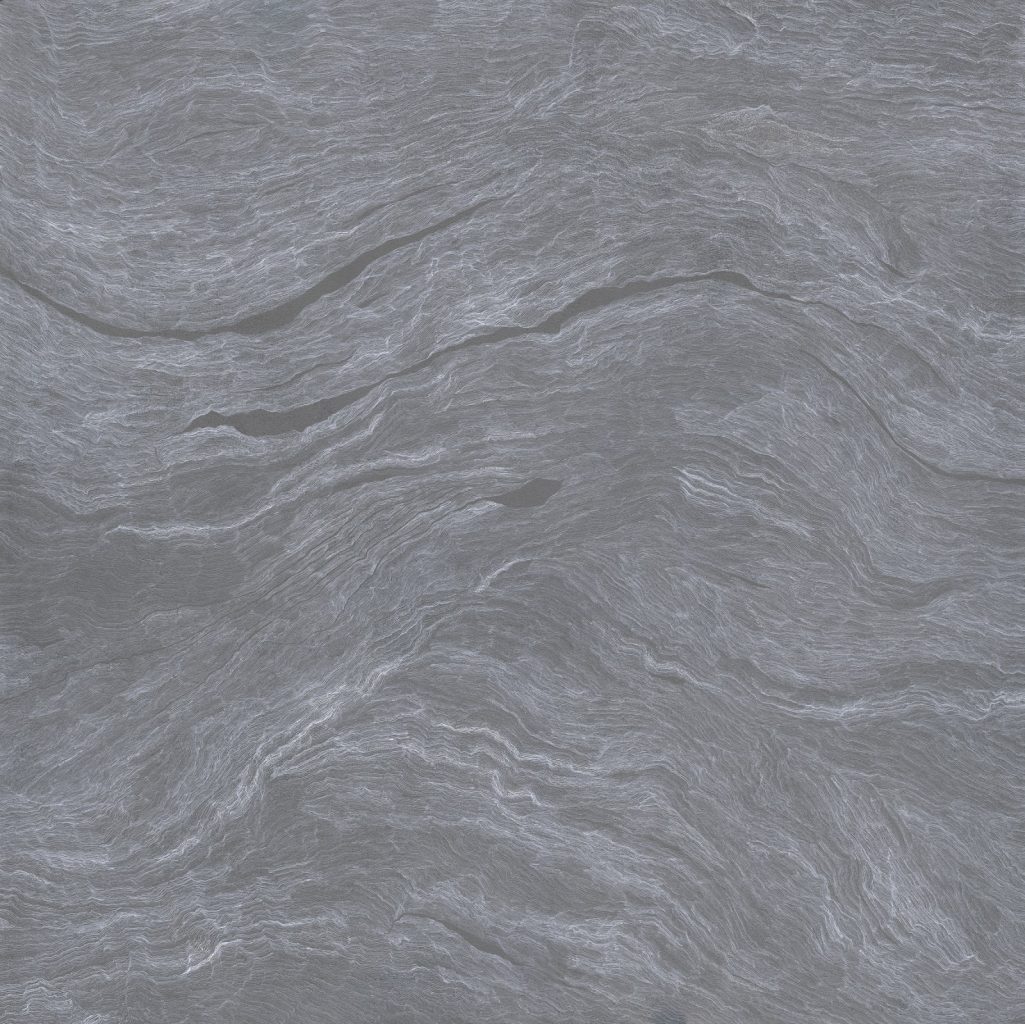 Al Denyer came here from England, a place celebrated for its paradigmatic topography: hills and dales, lakes and rivers, cliffs and footpaths. Since she departed that small country — physically for the expanses of Utah and cognitively for even larger landscapes, like the Amazon rain forest — her art has paid attention to the convoluted relief of drainage networks and erosion patterns. Then she turned to what she calls Borders and Boundaries, though the pandemic interrupted those pursuits. Her early graphite drawings required endless hours spent meticulously transforming elaborate, leaf-like patterns. More recently, acrylic paintings like “Terrain Lawn” and “Stratify 1,” both of which are on exhibit at Modern West’s group exhibit Earth, find fulfillment in rhythmically tracing the relief patterns of more deceptively stable landscapes: ones that record the history of endless sedimentation, deposition, upheaval, and cutting away of the lively parts of the only planetary home we have. 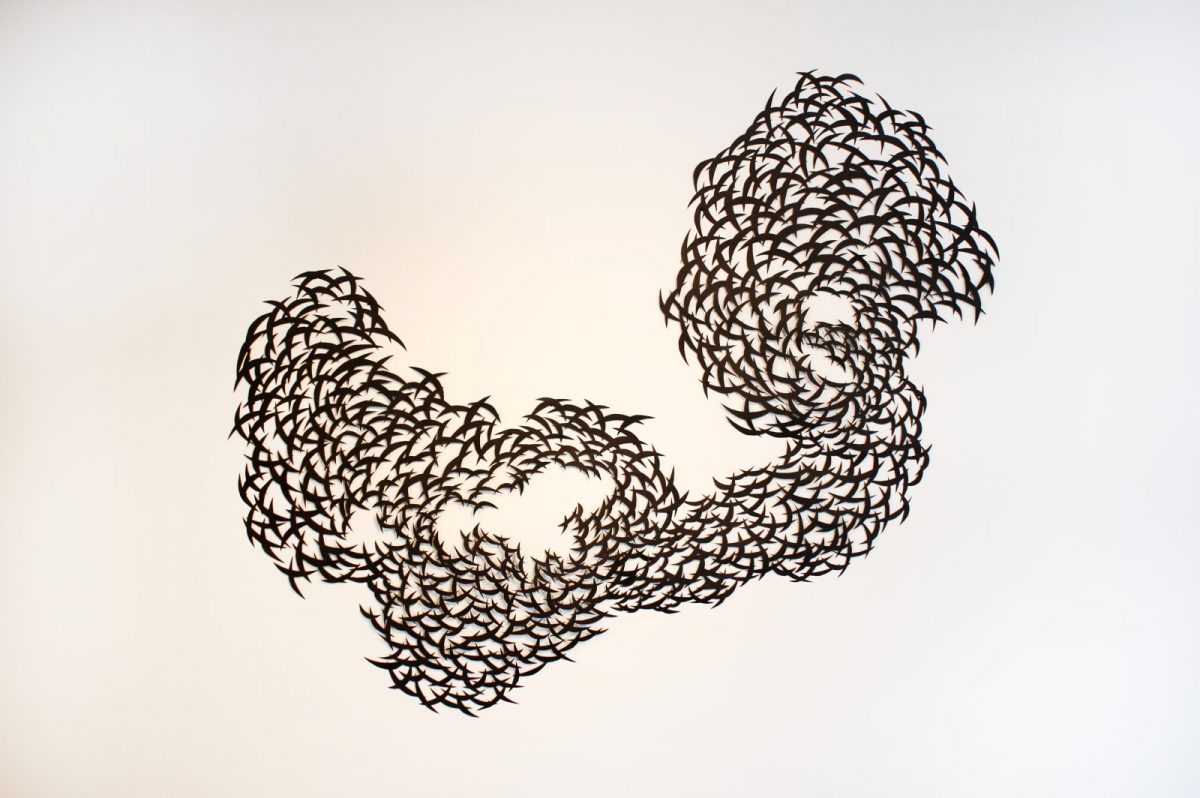 Another Utah immigrant, Lenka Konopasek, has built a career on making durable cerebral impressions from paper, a material otherwise thought synonymous with “ephemeral.” Since moving here from Bohemia, a kingdom renowned for the caliber of its arts and crafts schools, Konopasek has inverted the typical trajectory of art by moving from bronze sculpture to oil paintings of fires, storms, and other disasters striking manmade structures, only to focus on lyrical constructions made, in large part, of raw black paper. “Swarm,” her contribution to Earth, becomes its centerpiece as much by its centripetal power as by virtue of its occupation of the gallery’s main wall. Essentially an all-but-flat bas relief, it consists of some hundreds of crescent shapes, inspired by inverting the spectral lights that form around shadows modified by the sun’s shape during a solar eclipse, graduated in size and arranged to suggest birds in complex flight formation. In places, they produce illusions of clouds or tunnels deep into space. Konopasek seems to know what Jackson Pollock only guessed at: that a flat pattern seen by the eye will generate a third dimension in the mind. Her always superb compositions demonstrate their versatility as they endlessly flip back and forth, in the manner of a gestalt test, between two- and three-dimensions, giving them an irresistible sense of movement and life. 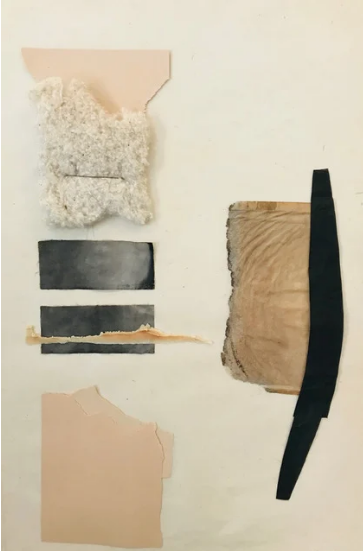 A different kind of immigration is shown by Colour Maisch, who though born and raised until her adolescence in Salt Lake, was then taken away with her family to Southern California, only to return in time for college. Her immigration took the form of her discovery of art at the age of 27, when she was already fully prepared for another life’s pursuit. Uprooting young persons during the crucial socializing years spanned by high school is now discouraged, and Maisch admits it was difficult to overcome. It may also have something uncertain to do with her approach to media, which she gives an entirely new and personal dimension to mixing. A series of collages, each called “Detritus Harvest,” offer a neatly contained presentation of an aesthetic instinct she first demonstrated at a Nox Gallery show where they sprawled over the floorspace in equal parts found and created matter. Many assemblages contain precious, or at least recognizable parts; these appear to be comprised entirely of refuse, but harvested by her eye and its feel for textures and subsequent juxtaposition. Another series, Grass, consists of intricately formed porcelain, stained with ink and redolent of biological sources. More than anything, they recall Asian landscape-stone traditions like gongshi and suiseki, wherein tabletop tableaux become objects of contemplation and meditation. 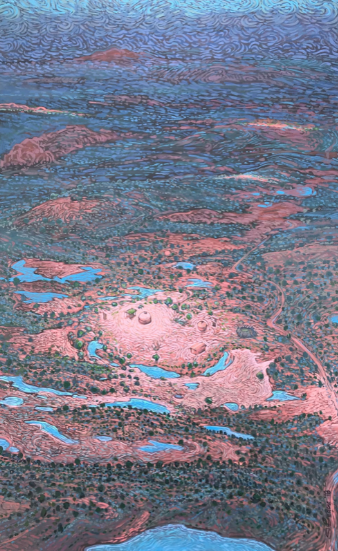 There are twenty artists in Earth, which was inspired in part by an exhibition, called This Earth, planned for the Southern Utah Museum of Art. None of the works included here offers a 1-to-1 connection to its subject matter in the natural world. For instance, in Woody Shepherd’s “The Lightning Tree Over Twin Lakes” and “Jardine Hollow,” which might pass for realistic paintings, the outlines are simplified and the colors punched up until they take over, resulting in an almost hallucinatory visual experience. Shonto Begay, in “Sheep Camp Circa 1960s,” channels Vincent van Gogh into a bird’s- (or God’s-) eye view of a land that plays a far more vital part in the life of those who dwell on it than asphalt streets and watered lawns can ever do in more familiar places. In Phil Epp’s “Building Storm” the air pressure of a desert thunderstorm becomes visible.

Two contrasting presentations of downed trees are shown by Kiki Gaffney and Nina Elder. In “Fallen Trees,” Gaffney augments graphite drawing with gold leaf and vinyl paint to further defamiliarize foreground objects removed from their contexts. Elder, aware of the arboreal family ties between trees, wood pulp, paper, and charcoal, has reunited them in “Rot Pile.” It’s arguable that such choices “mean” more than they “show,” but the differences between media, such as between graphite and charcoal, are clearly visible, and it’s not impossible that what the artist knows she is drawing with alters her results in some real, if subtle way. A possible analog can be seen in Rebecca Campbell’s “Bolt 2” and “Bold 3,” visually dazzling exercises in pure paint that mean to capture the explosive character and spectacular energy of lightning, compared to centuries of dull, traditional, literal images that attempt to freeze the action and end up killing the thrill. 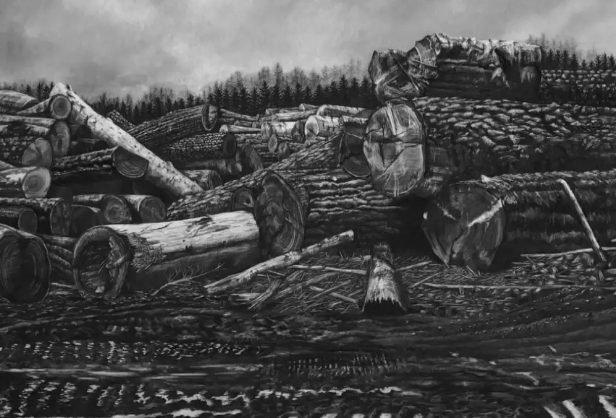 Another transformation that once again demonstrates the power of art, of what the viewer knows, to metamorphose completely, can be found in the bronze tree trunks of Day Christensen, which replicate the surface features of the original boles so perfectly that it becomes impossible to prove to the senses that they’re not real trees moved indoors. But trees cannot be domesticated, and the more closely they resemble the originals, the greater the cognitive dissonance becomes. This makes for a compelling emotional experience. Christensen is a popular public artist, and the way these copies, presumable cast from actual trees, surpass how a conventional artist might sculpt them from the imagination has much to say about where art is today. To bring trees indoors is impractical, but to bring the idea of them inside, with our individual, personal memories, shows that craft can recall but not replace them. The representation of Earth in the gallery sends us back to nature: threatened, precious, and utterly irreplaceable. 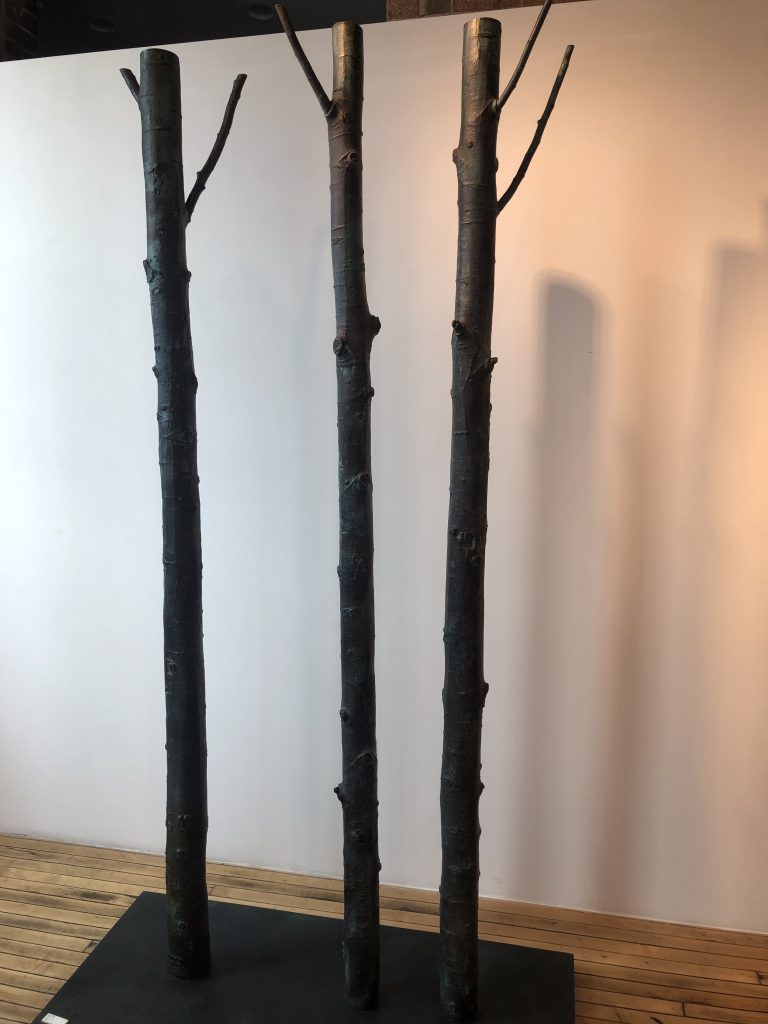