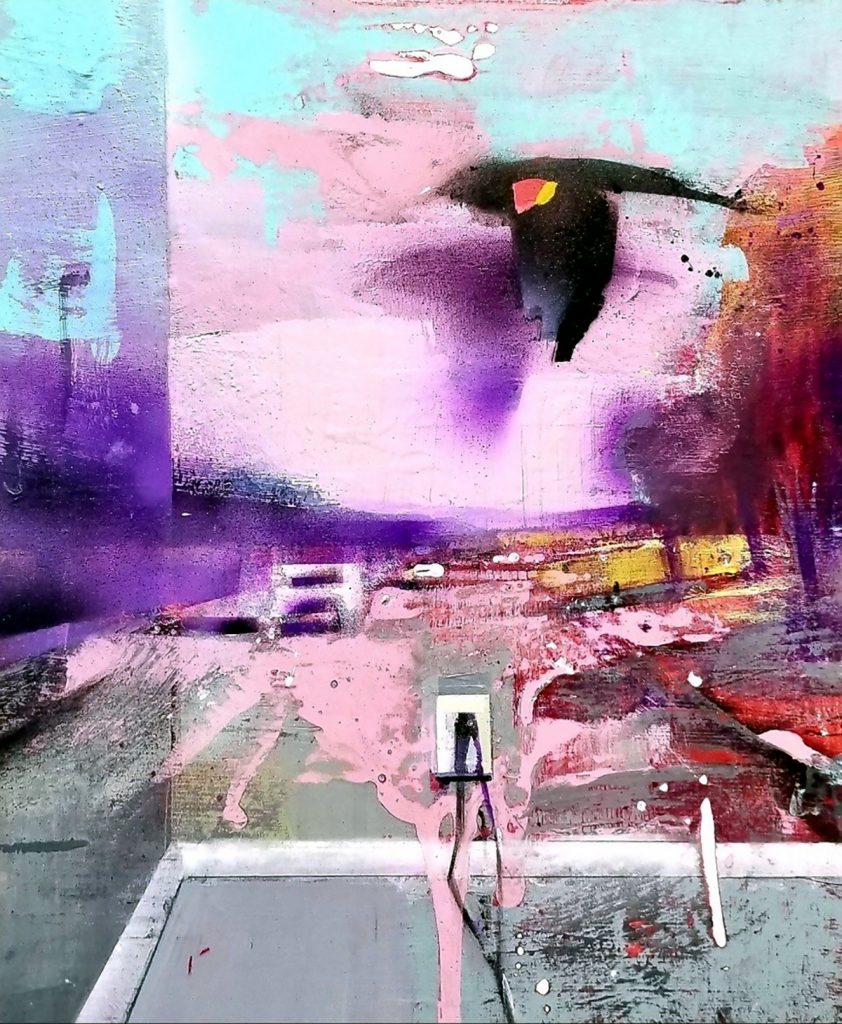 Utah artists like what they do. If any of them feels tortured, they’ve kept it to themselves. Some see their art as a prayer, others feel like telling a story. Some see art as a challenge to take on. A popular gallery like Phillips can pull together three painters at one time that neatly balance each other and show the range of what art can do.

John Erickson might well be called an academic painter. He’s taught artists at the U of U for thirty years, but that’s not what’s meant here. What makes his painting academic is an underlying quality; a feeling that behind his brush lies the history of painting, how it developed and what it’s capable of achieving. Here’s a metaphor: suppose a painting can consist of 25% composition, 25% perspective, 25% anatomy, 25% light and 25% shadow, 25% action, 25% line, mass, subject matter, theme, and so on . . . seen this way, no one element in a painting is enough to complete it, but together the parts are more than sufficient. So an artist like Erickson can selectively include and creatively omit what he observes and what he knows about it, and not only leave the eye satisfied, but take it along on a journey of discovery that keeps the early childhood thrill of learning how to see and decipher appearances an active pleasure throughout life. 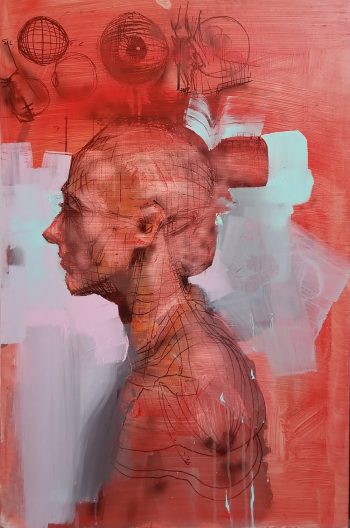 Perhaps the most comprehensive thing painting like Erickson’s reveals about the visual is how what we see falls midway between what lies deep within a thing and what is external, bounding it in space. A painter gets to choose: do we see its interior, its structure, like a cut-away or X-ray view? Do we see what surrounds it, limits it, is displaced by it? Two perfect examples are at hand: in 2014, 15 Bytes’ chose Utah’s 15 most important working artists, and in the book that resulted John Erickson, one of those chosen, was represented by a painting titled “Build a Woman.” Seven years later, the show at Phillips discussed here includes “Profile.” Although the two works approach their subjects, both women, in variously differing ways, each combines analysis of the figure’s interior with a three-dimensional study of what surrounds it, ultimately directing attention to the surface of the head and shoulders. Each then shows how the image, the “skin” results from pairs of forces: some from within pressing out, the others outside pressing in.

Any show this good will inevitably offer lessons in painting to those who are ready to learn. Without having made progressive copies of a single work, the large variety shown here include the various stages of a work in progress. There are no preparatory drawings per se, but drawing like that seen in “Profile” can be found in many places, including in “Above All Others,” which leaves the plywood base partly exposed, the paint puddled along the edge in a frozen display of its fluid characteristics. In spite of being titled, atmospheric watercolors remain close to their origin in sketches or studies. And in the finished works, Erickson revels in a playground that includes, but is not limited to: Expressionism — painting emotions onto the bodies that contain or evoke them; Dada — in which the destructive impact of a World War is brought to bear on ‘civilized’ society; and Surrealism — where dreams take on appearances and identities. 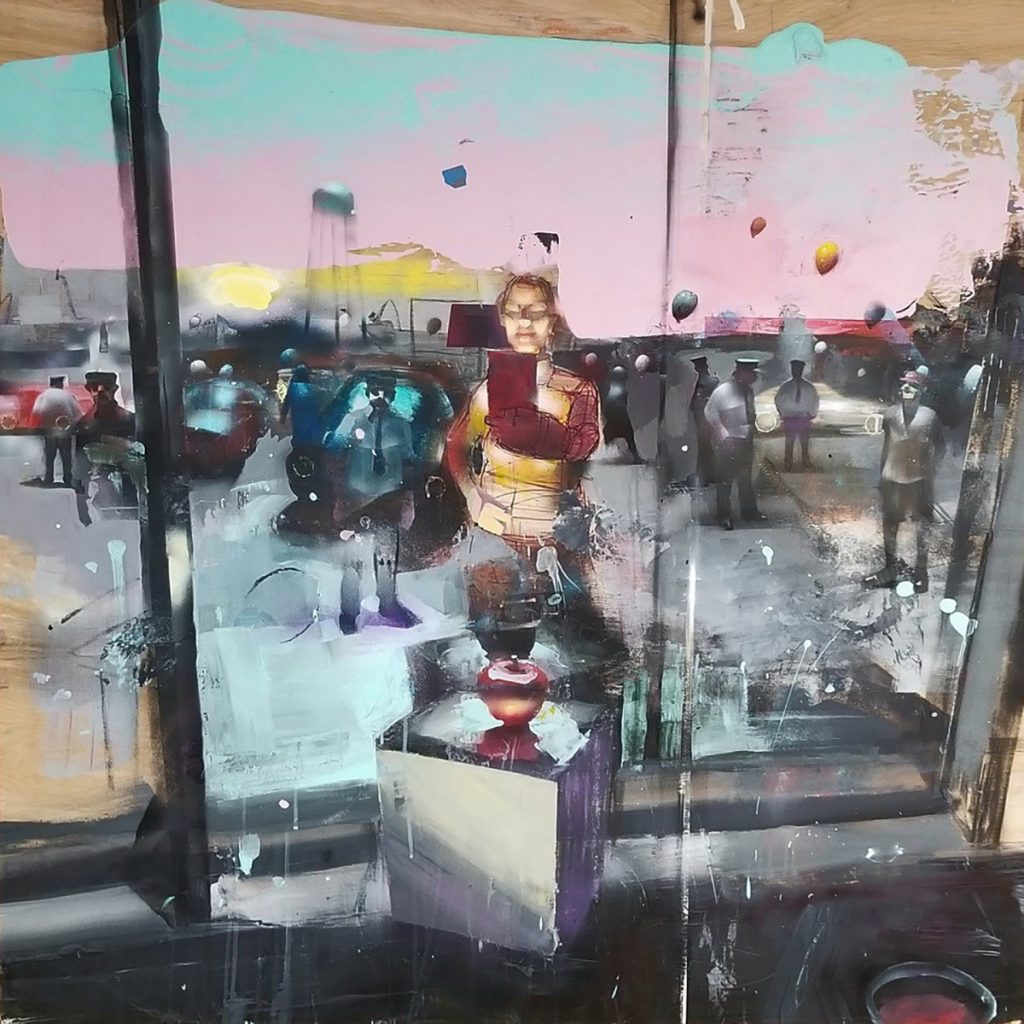 Viewers may feel that when they see a painting like “Here to Here Through Here,” wherein a red-winged blackbird in flight casts its shadow on the sky, turning it into a painted backdrop (which it is), some explanation must wait to be puzzled out. But pictures don’t wait to be turned into language — this review not withstanding — pictures come before language, and are better connected to feelings than words. Several works, like “Above All Others” and “Ecstasy and Oblivion,” present what appear to be nighttime visions through plate glass windows, while others, “Here To Here Through Here” and “Fly By,” are seen through an opaque wall near the corner of a room. In both cases, they feel like the way things feel in life: some things are inside, some things are outside, but some things that seem to be outside are actually inside, reflected in the glass, or projected on the wall. 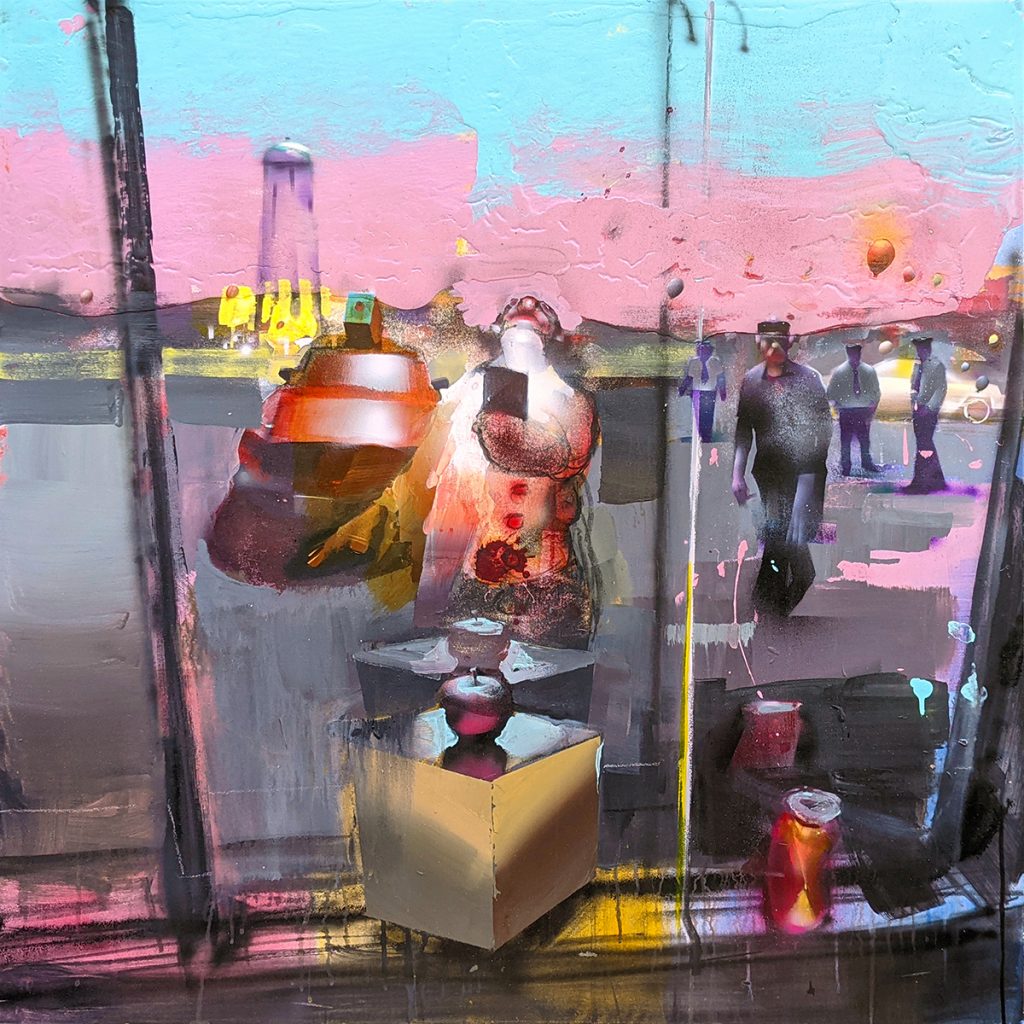