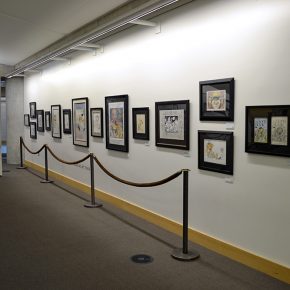 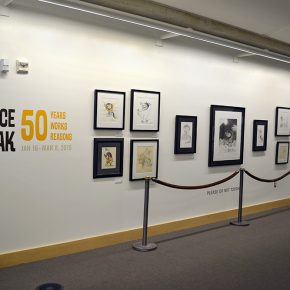 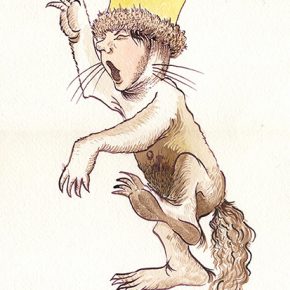 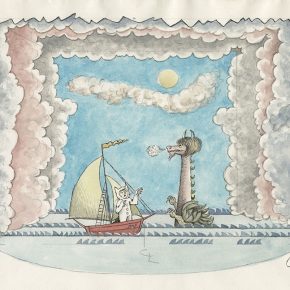 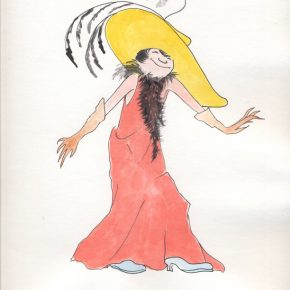 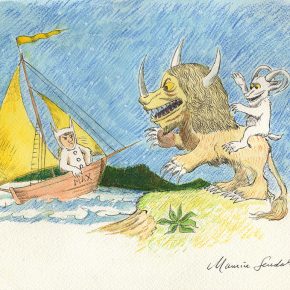 Roundly praised, intermittently censored, and occasionally eaten, Mr. Sendak’s books were essential ingredients of childhood for the generation born after 1960 or thereabouts, and in turn for their children.       —Margalit Fox, New York Times obituary

The news that a touring exhibit of works by Maurice Sendak, the most important book illustrator of our time, will be on display at the Salt Lake City Library from today until March 8 matters for reasons beyond the undeniable merits of the artist and his works. The sad fact is that since his death, this master’s bequest to the Rosenbach Museum and Library in Philadelphia, which frequently tours exhibitions like this of works drawn from its collection of over 10,000 pieces, has been challenged by Sendak’s estate, which seeks the return of these objects for placement in a proposed new museum and study center in Ridgefield, Connecticut. While the choice of Pennsylvania vs Connecticut may not make a lot of difference to us in Utah, such disputes have a way of rendering their objects inaccessible for years or even decades. So long as the law has shown a preference for locking things up until it can decide who should control (and profit by) them, it may not matter whether the artist’s estate shares the Rosenbach’s desire to circulate these treasures. This could be the last chance for anyone to see them in person for the foreseeable future.

For those readers who either have no children, or still accept the reflexive, grade school prejudice against books with pictures in them, Maurice Bernard Sendak was the most successful book illustrator in the world at the time of his death, at age 85 in 2012. If that seems a tepid boast, consider that Japan makes more cars than Detroit and India more movies than Hollywood. Given that American publishers now overwhelmingly belong to corporations in France, Germany, and Mexico, it’s worth noting that the artist primarily responsible for a children’s literature that adults read on their own was born in Brooklyn and inspired to do his life’s work by viewing Walt Disney’s Fantasia. It’s true that the deaths of many of his relatives in the Holocaust helped color the emotional tone of his work, but so did early experience designing window displays for the toy store F.A.O. Schwarz. Anyone paying close attention to the influences on today’s American consciousness and its artistic expression should agree that a better blend of influences is hard to imagine.

Of course no important artist can be without detractors, and Sendak’s works have raised hackles among concerned parental groups. Before becoming a successful stage play and movie, Where the Wild Things Are upset some for its grotesque characters and sympathetic treatment of a child’s conflict with parental discipline; never mind that these played well with its primary target audience, children, and set up a moving resolution that restored the one essential relationship in every human life. Criticism grew more shrill when the sequel, In the Night Kitchen, did Winsor McKay’s pioneering cartoon character Little Nemo one better by presenting its similarly dreaming protagonist dressed to show his innocence and wonder: in the nude. The comparison is not trivial: Nemo appeared in Sunday newspapers, where social decorum is arguably the larger concern, and featured the artist’s legendary graphic precision, while Sendak’s stories come in books that can be withheld from children by their guardians and, like all good stories, leave as much to the reader’s imagination as they supply the eye. It’s also been well demonstrated that unless it’s made an issue for them by their supervisors, children tend to overlook such casual realism, or if they notice it, quickly and efficiently add it to the mix of what they already know.

A larger issue for 15 Bytes might be the relative importance of children’s books vs the gallery arts, like painting, sculpture, and mixed media, generally considered to be cutting edge today. Setting aside the matter of numbers—the millions of fans, ubiquitous across society, who have enjoyed and can usually name at least one work by Maurice Sendak, but couldn’t name any of his gallery-shown contemporaries—it’s important to realize that Sendak is not alone in his achievement. Art today can be likened to an assortment of games, each a local event with its own players and audiences, like baseball versus basketball, or chess in the park versus computer role playing. The most prominent, but by no means the most important or influential game is played in New York, Miami, and Los Angeles by wealthy donors, who can pay for room-sized works executed by large teams of artisans. Yet other art enthusiasts, equally if not better informed, prefer to spend their time looking at landscapes, trompe l’oeil still lifes, quilts, ceramics, or any of dozens of more accessible, and arguably more rewarding media. When the Swedish-born graphics genius Art Spiegelman began to tentatively insert recollections of his parents’ experiences in Auschwitz into Raw, the comic anthology he was then publishing with his wife, the French artist and editor Françoise Mouly, it quickly became apparent than a new game, international in scope and transcending conventions of age and subject matter, had been maturing beneath the awareness of all but the most alert art journalists. It hardly seems a stretch to include Maurice Sendak in this graphic literary movement.

Speaking of Art Spiegelman, it’s worth noting that while both he and Maurice Sendak have done work for hire, illustrating the writings of others or producing book jackets, CD covers, and other ways of illuminating a variety of artworks, each of these seminal artists did his best work when he both wrote and drew the final product. As graphic narratives become ever more popular, they are increasingly the product of teams of specialists, like the comic book industry where one artist writes the story, another draws pencil roughs, a third inks them in, and a fourth creatively letters the dialogue and text. The present, then, represents a watershed moment, when inspiration still counts for as much as the power of industry. The chance to see Spiegelman’s original drawings for Maus, with his hand-razored out and replaced changes, shown in Los Angeles a few years ago but replaced by photocopies for the recent world tour, or Maurice Sendak’s hand-painted drawings of “Max on the Island of the Wild Things,” will not last forever. In fact, for us, for now, it lasts until March 8.

Maurice Sendak: 50 Years, 50 Works, 50 Reasons opens at the Main Library on Saturday, January 17. The celebration will include a screening of the film adaptation of Where the Wild Things Are at 2pm followed by music, refreshments and a meet-and-greet with Max and the Wild Thing at 4pm. The exhibit is be located in the Children’s Gallery of the Main Library, located on level L1, and will be open during the Main Library’s operating hours: Mon–Thu 9am–9pm, Fri–Sat 9am–6pm, and Sun 1–5pm. Admission to the exhibit is free and open to the public. The exhibit continues through March 8,