Ballet West’s Innovations at the Rose 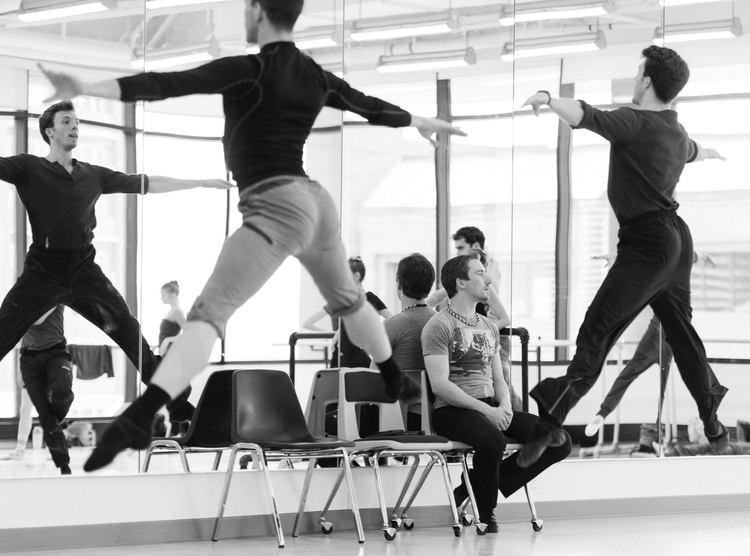 Ballet West’s annual Innovations series opened this past weekend, showcasing work by company artists alongside Jessica Lang. As always, the evening presents wide-ranging approaches which will expand next year with a new National Choreographic Festival and a move of Innovations to Park City where it will be retitled, Works from Within.

The evening opens with new work by Principal Artist Christopher Ruud. “In Memoriam” echoes Ruud’s strengths from previous commissions, namely an ability to highlight individuals within group structures. Throughout the dance an older woman (Barbara Barrington Jones) revisits herself as a girl, teen, college woman, and wife in an abusive relationship. In each vignette Jones opens a dresser drawer containing nostalgic objects (a graduation hood, a veil) and retreats to observe soloists, representing each life-stage, who are framed by groups of passing men. In some ways the male framing of a female narrative flips ballet’s expectations (mostly women surrounding heteronormative partnering) but in others, the story remains expected. For example, when Jacqueline Straughan’s character falls into a violent pas de deux it’s not her own self worth that drives the conclusion, it’s being rescued by a new partner.

Music commissioned by Jared Oaks adds sentimentality, particularly when Katlyn Addison appears to usher Jones into an afterlife, generously opening a final dresser drawer the audience never sees inside of. Ruud’s comments on aging are more narratively dramatic than they are in some dance counterparts including the multigenerational repertory of Liz Lerman and relatively new documentaries featuring performances by aging bodies.

The second act presents works by three new contributors to Innovations, beginning with “Barre Spot” by Christopher Sellars. With live piano and saxophone, the work is a play on a jazz bar and explores musical theater idioms within formalized ballet structures. Without a core narrative, the work shares passing duets and trios that cycle in and out of the attention of the audience. The dance is lighthearted and left me wanting to see more of Sellars’ point of view.

I’m also left wanting more of Oliver Oguma’s “Fragments of Simplicity,” a dance with three sections to Chinese violin. A duet between Alexander MacFarlan and Jordan Veit is subtle and the dancers curiously explore twinning with slow movements and articulate backs changing slowly to reveal new perspectives. Latter sections with a female ensemble and a pas de deux are less explored and the strength of the work is in the early representation of a potential for male bodies to be virtuosic even in stillness and gentleness.

The final work in the act, Trevor Naumann’s “Homer: a study in phenomenological ontology,” represents a radically different point of view, not only due to overt philosophical ideas but also choreographic approach. A commissioned score by Boaz Roberts lends itself toward contemporary ballet’s frequent employ of atonal electronic ambience and the dancers move frantically in nude unitards reminiscent of Martha Clarke’s “Garden of Earthly Delights.” Later, becoming dressed, the pairings begin to isolate particular dancers as an effort to consider titular objectives: studies of experiences and studies of being.

What the title may overlook is that ballet already can be viewed as a quite literal embodiment of phenomenology and a way to study ourselves in relationship to our experiences. There are perhaps few performative wonders that compare to a traditional corps de ballet balancing en pointe in relatively immobile formations. And there are equally few scenarios where audience members can experience themselves kinesthetically in relationship to externalized experiences. This notion of physicalized wonder has weaved its way into many phenomenological dialogues, including a beautiful book on the aesthetics of rare experiences by Philip Fisher.

The only way choreographer Trevor Naumann might further flip a phenomena-based dialogue within the form would be to more completely invert audience expectation in relationship to our identification of ballet as a form. In this case the only thing I can think of would be for one of the principal women to sit center stage casually consuming a bag of potato chips while the house lights are up.

“Lyric Pieces” by Jessica Lang closes the show on a more traditional but inventive note and thankfully shares the viewpoints of at least one female choreographer among an otherwise entirely male program.* The dance takes place among folding paper sculptures that generate scenic interest and create unique entrances and exits. A great victory of the dance is that I thought there was a cast of 20. Instead, the curtain call revealed that it was only eight dancers who tricked me into seeing vastness as they created lengthy pathways, found hiding places and directed one another in alternating silly and poetic tasks.

Artistic Director Adam Sklute aptly described Lang’s choreography as straightforward and suggested that her dances follow a logic making their conclusions inevitable. In my sense of delight and anticipation in “Lyric Pieces,” this was certainly true.

*Let me preempt common complaints about this variety of feminist critique in dance: yes this choreographic platform relies on women to opt in and if they don’t it can be said there is simply a lack of interest among the particular group, but mathematically it’s murkier. In a company of 40 dancers with 24 women (60%) and 16 men (40%) there is less than a 2.5% probability that all four choreographers would be male in a randomized selection. In recent iterations of Innovations there has never been more than one company woman on the bill and in that equation it’s still less than an 8% probability that only one woman would be selected in a randomized process. These percentages reveal that some systematic bias is present, however unintentional. It’s important to ask questions about where the remaining 97.5% likelihood shifts: is it women’s greater satisfaction with the roles they are given which creates a lack of desire to choreograph? Do women have greater challenges within that same repertory which diminish the time and energy it may take to engage in a choreographic process? Are there characteristics seen as valuable to ballerinas which are characteristics less likely to be present in a large cross-section of choreographers? Past works by Emily Adams and Katlyn Addison have been strong contributions to the Innovations platform and in writing, I wonder what conditions would it take for more women to rise within those same ranks?

Ballet West’s Innovations 2016 continues through May 28. For more information visit balletwest.org.
This article is published in collaboration with loveDANCEmore.org.