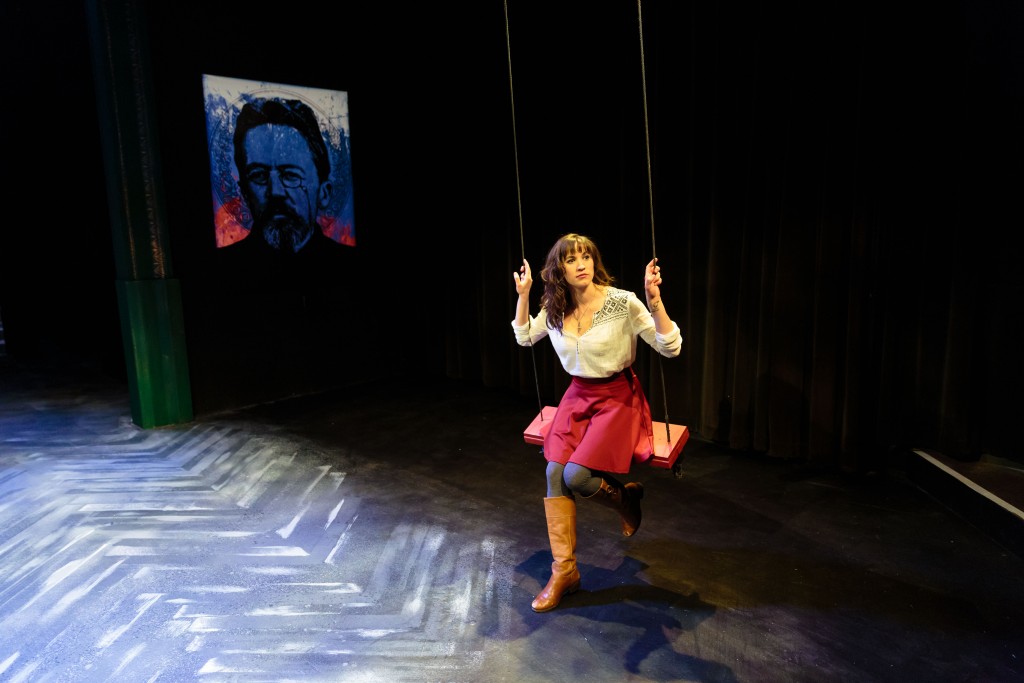 Once upon a time, stories told through theater resonated with audiences because they explored uncomfortable yet real themes, but this power has been diminished by the popularity of theatrical productions with fairy-tale endings where love conquers all and conflicts are ultimately wrapped up in a tidy, sugar-coated bow. This is the lamentation of Con, an artist and playwright, (Alexis Baigue) in Salt Lake Acting Company’s Stupid F**king Bird. Con’s frustration is an apt expression of Aaron Posner’s play—a postmodern adaptation of Anton Chekhov’s Seagulls— directed by William Missouri Downs. The production not only shreds the notion of tidy packages right along with the bow, but then sets them on fire just for good measure.

A tone of stripped, raw honesty is established from the outset. Con takes the stage and asserts that the play won’t begin until someone from the audience bids it to start. With this abrupt, humorous gesture, the fourth wall is obliterated and the spectators are left in an exposed, unfamiliar position of intimacy with the performance. And they remain in this oddly precarious but intriguing position for the duration. The characters reciprocate by opening up with ruminations on self-doubt and love that everyone thinks but usually leaves unsaid because our culture is fixated on curating the perfect life framed by a white picket fence.

In the first act, Con hosts a production of his latest work, which he insists is not a play but a “site-specific performance event.” It stars his muse and the woman he loves Nina (Anne Louise Brings). The debut of this play-within-a-play occurs on a small stage in the backyard of an aging actress, Con’s mother, Emma (Nell Gwynn).

The evening becomes a perfect storm that is in equal parts painful and funny. Nina gives a beautifully over-the-top performance made charming by her youthful exuberance as she tries to impress Trig (Terence Goodman), a successful writer she is hopelessly infatuated with who is inconveniently in a relationship with Emma. Nina’s oration about living in the present moment is filled with her repeating the name of the performance Here We Are, which she punctuates by stomping her foot with gusto as she says each word: Here. We. Are. Because that isn’t enough, Con adds emphasis by flashing the lights in time with those lines. Tellingly, Emma is anywhere but at the performance, as she appears bored while her son is so clearly clawing for her attention. 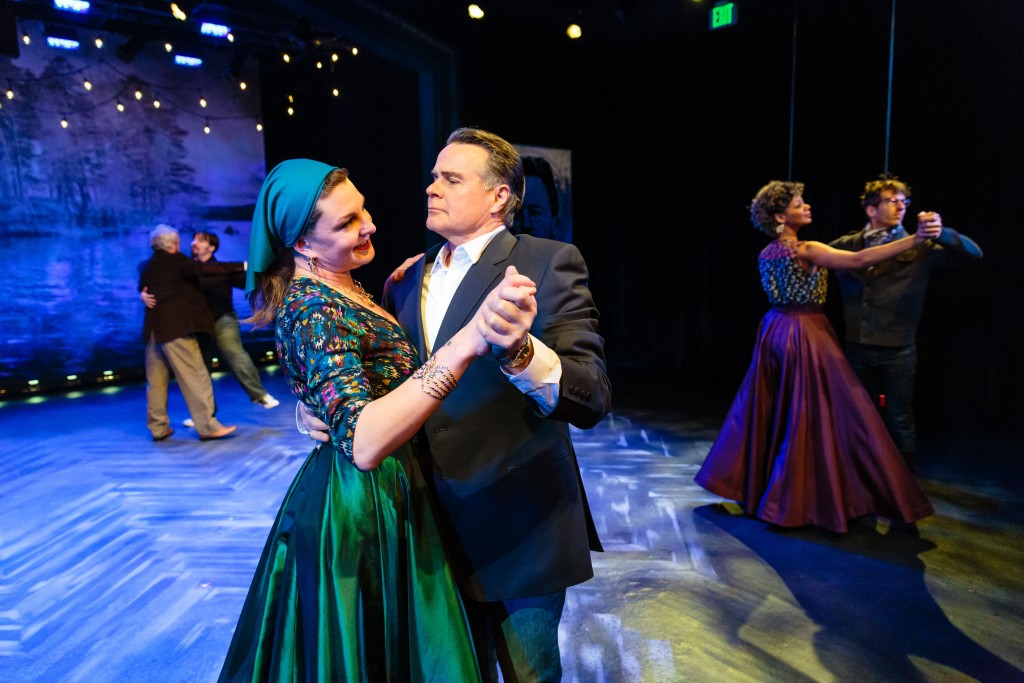 Con’s psyche becomes frayed as his artistic quest to create something new doesn’t meet his expectations, Emma’s success from another era keeps her from connecting with his artistic dream (or maybe it’s her slightly narcissistic streak that prevents them from being close), and Nina quickly slips through his fingers. These events push Con to the brink, and when he appears near the beginning of the second act, he is recovering from a suicide attempt.

It’s jarring to see Con dressed in disheveled pajamas, with a comically large bandage wrapped around his head. Like anyone crawling back from the edge, he knows the only way to move forward is to put one foot in front of the other, and though it’s not necessarily graceful, it doesn’t have to be. While Emma is baffled about how to help, and concerned friends Dev (Justin Ivie) and Mash (Latoya Cameron) come to visit, Con is preoccupied with sitting on the kitchen counter and making a smoothie out of anything that’s within arm’s reach. The ingredients are an increasingly comical combination as he adds coffee grounds, beer, and what appears to be vodka he pulls from the fridge. It’s odd, unsettling, and just right, because while there are cocktails for many occasions, there is no traditional drink for toasting a failed suicide attempt. Con drinks the concoction straight from the blender with an enormous red straw.

Earlier in the scene Mash, who is every bit as cynical as Nina is optimistic, reflects on Con’s abysmal state by wryly observing that people are “cosmically screwed” and life can be compared to moments on the Star Ship Enterprise when the self-destruct sequence is underway, but we don’t know how long the timer is set for.

Death is a certainty in life, and the third act fills the audience in on what each character has been up to for a few years and what they do until they reach the grave. It’s doesn’t bring resolution, simply an ending. Nobody lives happily ever after, at least not the way we’re taught by Disney. The fumblings of the characters in Stupid F**king Bird are reminders that tidy endings are unobtainable, and it might be worthwhile to let honesty melt our fragile cotton-candy exteriors to allow for what’s real: life is full of ambiguity, frustration, unfulfilled longing, and loose ends. And at times, when we’re lucky, we can laugh at the absurdity of it all. 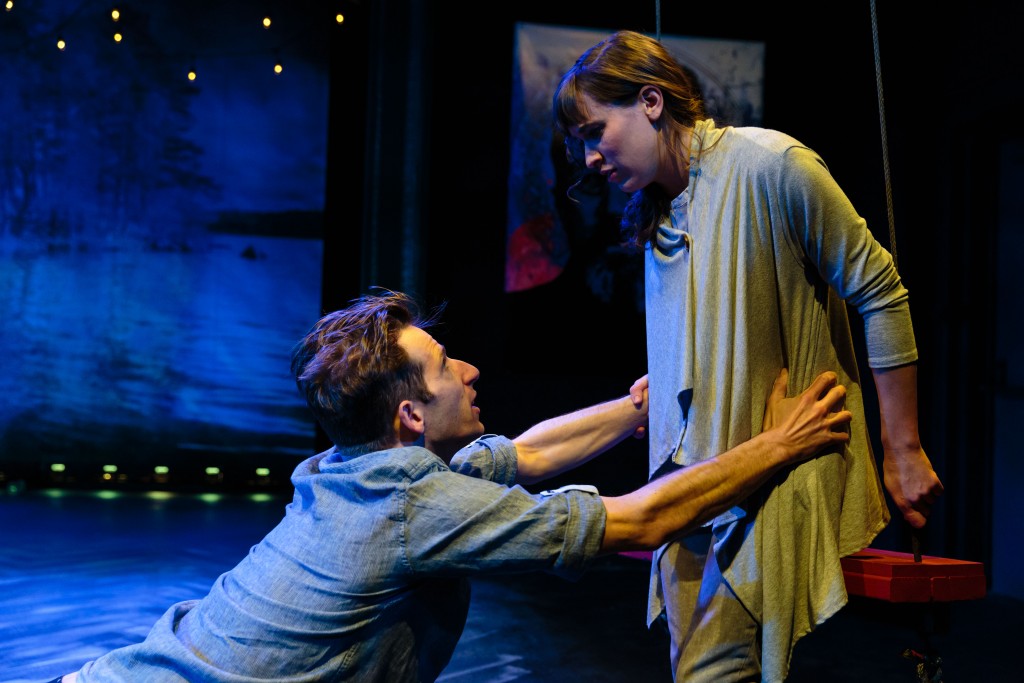 Stupid F**king Bird runs through May 1 at Salt Lake Acting Company. Tickets can be purchased at the box office or online.