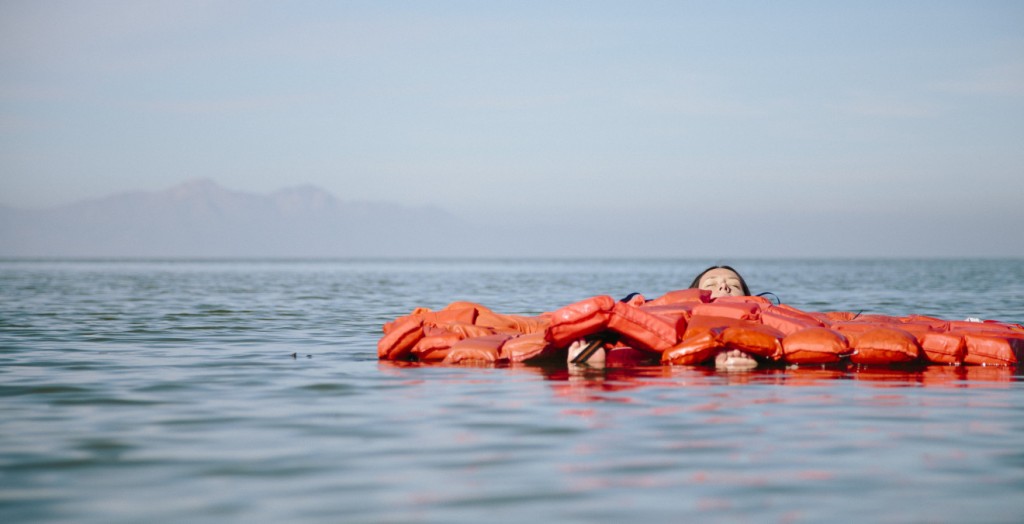 Longtime followers of UMOCA, going back to the days when it was called the Salt Lake Art Center, have known to check out the room all but hidden in the back, at the northeast corner of the large, downstairs gallery. Here gems often can be found: small collections of works that appeal to the cognoscenti, or videos irresistible to those who prefer to sit in the dark and let an artist’s vision have its way with them. Currently, it’s the scene of Scottish artist Jean Richardson’s Every Now and Then I Fall Apart, an installation that surrounds itself with a cloud of wordplay—“a poetic metaphor for the longing to find the familiar within the unfamiliar while simultaneously seeking out the unfamiliar to detach from the familiar”—wrapped around some baffling artifacts and an airy video, even as it refuses to yield an explanation or solid answers. A professor of Performance Art might be expected to give it a low grade for its failure to clarify what happened on an unknown date, in an unidentified sea, or why the life preservers lying on the floor in front of the video screen have various names written on them: Johnson, Henderson, the initial G. Most perplexing is the text written on the floor in white, all-capital letters:

THERE IS A POTENTIAL FOR BUOYANCY LOSS DEPENDING ON HOW THIS DEVICE IS USED AND CARED FOR. THE IN-WATER PERFORMANCE OF THIS DEVICE SHOULD BE TESTED AT THE BEGINNING OF EACH SEASON TO DETERMINE THAT IT PROVIDES ADEQUATE PERSONAL FLOTATION.

It’s a mystery. But is Richardson guilty of mystification? The enigmatic, where science hasn’t a lot to offer, has always been the proper dwelling place of art. The proper question is whether gnomic expressions, those that encourage, and even require, an audience to speculate about meaning, should be preferred to the vogue for art wherein the artist lectures the audience from research or demonstrates potentially superior knowledge, no matter that the goal may be to generate a sense of solidarity with enlightened viewers already in agreement. The wealth of diverting options available in today’s culture can lead to a sense of lost purpose—How can we think about pleasure when something may be dying?—and so make anything that doesn’t address emergencies like ecology and terrorism seem trifling. But then along comes the artist, afloat on the sea in her photograph that accompanies Every Now and Then I Fall Apart, her fragile-yet-intrepid raft of spliced-together buoyancy devices also seen rising and falling on the open waves in the video shot from a bird’s-eye view, and sooner or later the metaphor comes clear: water quite appropriately stands for the reality we pit ourselves against, and that challenges us in turn; and our beliefs, even in what we know, are also a “buoyancy device,” requiring regular examination, reflection, reconsideration.

It remains for each person to decide whether this is what Richardson evokes with her collection of “objects . . . carefully chosen both for their arbitrary meaning and their personal significance.” Suffice it for the critic to point out that she reaches all the way back in art to Surrealism, in prehistory to theories that early humans drifted about on the world’s waters, and in the dark of the gallery to faith that what feels confusing may be evidence that will lead to understanding.

“Every Now and Then I Fall Apart,” by Jean Richardson, at UMOCA, Salt Lake City, through Dec. 19.