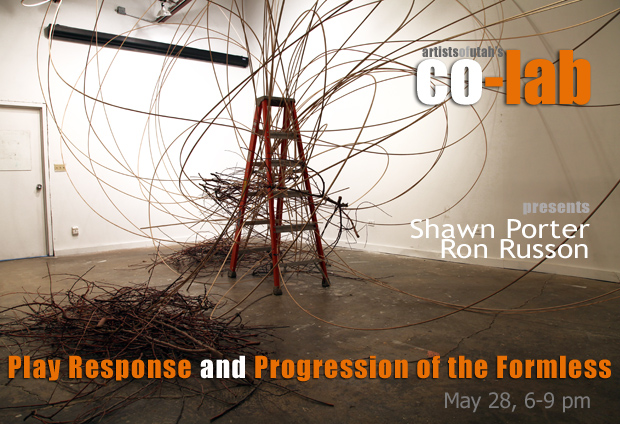 At our first co-lab event in February we talked with Shawn Porter and asked him, if he had the chance to work in our space what artist would he like to collaborate with. His answer surprised us – Ron Russon, a painter whose work had seemingly little in common with Porter’s installation work. Turns out, the two were childhood friends.

Later that evening, and unbeknownst to Porter, we ran into Russon. Guess who he said he’d like to collaborate with?

We gave them the keys to our space and told them to have fun.

The results, including an installation and video projection, are on view at this month’s co-lab.

Artist Reception: Thursday, May 28, 6-9 pm.
This is a one-night event
The co-lab is at Poor Yorick Studios
120 West Crystal Avenue (2590 South) in South Salt Lake.
Look for the red doors and chairs on the south side of the building.

THE ARTISTS
Shawn O. Porter grew up in Lehi, Utah and spent 3 years in the Navy working on a salvage ship and 13 years working as a professional woodworker, designing and creating functional pieces of furniture before becoming the facilities supervisor for the arts and sculpture buildings at the University of Utah. His sculptural works include seedpod forms spreading their seed, representations of underground nuclear test sites and structures signifying the impermanence of natural and manmade containment systems. Check out our profile of the artist here.

Ronald D. Russon was born and raised in a rural area outside of Lehi, Utah, just south of Salt Lake City. He was surrounded by the Wasatch Mountains, many farms, and acres of cultivated ground. Raised in a family of five boys in an agrarian area, work was taught and expected. When not working, Ron is often fishing, hiking, or drawing. He studied Illustration and Design at Brigham Young University and worked as a freelance illustrator before becoming a full-time artist. Check out articles on the artist here and here.

CO-LAB
The co-lab is part of Artists of Utah’s continuing effort to encourage collaborative art projects in Utah’s arts communities. It is funded in part by Salt Lake County’s Zoo Arts & Parks. Look for further installments of the program later this spring.