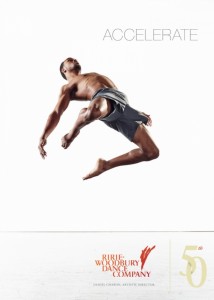 Accelerate marks the end of Ririe Woodbury’s fiftieth season as well as the end of the first year with their new artistic director, Daniel Charon. Comprised of three premieres, the show features Bradley Beakes, Alexandra Bradshaw, Yebel Gallegos, Mary Lyn Graves, Tara McArthur, and Bashaun Williams, whose versatility is evident in the vast body of commissioned work as well as in their individual endeavors as local artists who teach and create works of their own.

Each piece in the show explores different, yet similar ways to utilize video technology alongside dance; each has relevance inherent with the use of somewhat modern technology but similarities were inevitable because each piece shared the same space – the same options of where to project film and similar devices with which to do so. This is the irony of technology: each new type of digital technology promises liberation, but each comes with its own set of limitations and overwhelming options of uses that can be paralyzing for an artist trying to utilize it.

The first piece, entitled “Construct,” was choreographed in collaboration with the company by Daniel Charon, who designed the video component as well. It is accompanied by musician, Michael Wall, who composed the score and plays it live in the small orchestra pit of the Jeanne Wagner Theater. As the audience members began to trickle in, the company is already on stage with a bench (that seemed familiar as a somewhat popular prop in the Ririe Woodbury repertory) warming up in casual dance-wear. When the house lights finally dim, most of the dancers have left the stage save for one or two still jumping and lubricating their arm joints by swinging them around and around. The music drifts into the space, very openly with a loose melody indicating the “real” beginning of the show.

The dance begins at a high velocity – lots of dynamic partnering (in close proximity as well as synchronicity amongst couples far away from each other) and running from one form to the next in order to displace what lay there previously. The dancers that had left the stage after warming up return wearing identical sleeveless jumpsuits in various colors; the outfits look like benign hospital scrubs for the summer season. Eventually, the entire company has exited intermittently and returns wearing this goofy getup.

About a third of the way through the piece, a projection screen descends from the fly space above the stage. It lands stage left of the dancers who are sitting in various positions on the bench stage right, splitting the focus from real-life to recorded life. At this point the purpose of the costuming became evident — it allows each dancer to be extremely distinct from the others in the recorded and manipulated projection of the piece. The first manipulating effect is very captivating. The dancers are performing a series of movements around and on the bench in a very efficient manner – each constructing an individual pathway for themselves that is paradoxically limited by the confines of the bench. The recording shows each dancer complete their task in reverse and then shows it a few seconds later in chronological order, but extremely fast, like a representation of how fallible memory is: some things are out of order and some events are lost or blurred in the sheer mass of thoughts, images, and events to remember. Eventually another screen descends showing a different perspective of the dance that is riddled with physically charged movement constantly tumbling out of the expertly trained bodies of the company members. There is a definite rhythmic pattern of the movement that is like a slinky toppling down a set of stairs, resting for a moment before being catapulted down another set of the same number of stairs. The music, however, gradually builds, or should I say, accelerates, adding more and more components until it ends with a melancholy, wailing trumpet over grungy electronic sounds. The piece sparked thoughts on the meaning of individuality and if that concept is even realistic in our world as society seems to construct us more than we can ever shape it.

Next was, You and the Space Between, choreographed by Ririe Woodbury alumnus Miguel Azcue. Beginning with a down pool of light, center stage, Bashaun Williams and Alexandra Bradshaw tenderly leaned into each other, foreheads and forearms touching to support themselves. When they begin moving, their relationship seems more presentational than personal.  I was underwhelmed with the choreographic structure until, about halfway through, the projector turned on to display the word “Panasonic” with a blue background on the cyclorama. This was obviously wrong, so when a bird’s-eye view of the dance finally appeared after what were probably very panicked moments for the projection technician I realized that that perspective was probably an integral part of the whole piece. Even if technology is advanced and capable of myriad actions, it is still not impeccable nor are we as operators. We are constantly adapting our culture to technological advances, but that process is still being arranged and mistakes are inevitable and normal.

Azcue says in his program note that the piece “resembles a kaleidoscope where bodies and emotions combine in suggestive landscapes.” This was achieved in a confusing way where the dancers would skip around from being personal to creating presentational, cohesive kaleidoscope images (that were realized once the projector started working properly). There was one section, for example, where Mary Lyn Graves was isolated from the group and pitifully alone on the stage as well as on the wall of the cyclorama. She had a solo and was eventually integrated back into the group, but there was no continuity with more personal moments like those amongst the shapes and funny bits of wiggly movement that were merely entertaining to see projected onto the back end of the stage. I was reminded of the satisfaction that attendants in the courts of baroque era French monarchies might have had while watching performers spell out the storyline en masse as they watched in balconies from above. It was a visual spectacle that jumped from personal moments, to comedic effects, to simply displaying visually pleasing shapes.

The last piece was choreographed by internationally renowned choreographer Doug Varone, the choreographic god-father of RW’s Daniel Charon and University of Utah modern dance professor, Eric Handman who were members of Doug Varone and Dancers in the past and whose aesthetics are heavily influenced by his style. Varone’s piece is titled, “States Rendered,” and includes black and white film projections designed by Ellen Bromberg, a distinguished Professor of Modern Dance at the University of Utah and founding director of the first Graduate Certificate in Screendance. This piece is impeccably formulated. Varone is a master of creating architectural forms with bodies and then displacing one valuable component of the structure to launch the mass into a different form with angular movement that looks comfortable on the dancers because of their input in the process. The sound score of the piece is shocking; most of it sounded like humanoid creatures speaking a futuristic language that has remnants of current languages in it. The dancers are dressed in dark grays and blacks that blended well with the video. These visual and audio components add up to suggest a science fiction aesthetic that is engaging for its dark intensity. The piece refreshingly does not have a linear narrative that can easily become ridiculous in a typical kitschy, sci-fi way.

There is a point in the piece when the dancers are lying in a vertical line, stage right, and Alexandra Bradshaw bolts up and gasps, like she has emerged from the stark black and white world that they were emerged in for so long. This gasp is a sparsely used, strong spice that occurred once again when two dancers were left by the group in warm down pools later in the piece. This choice complements one segment of the video projection that looks like a sped-up recording of an ultra-sound where the dancers are trapped in a womb of humanoid sounds and icy lighting. The piece is so alienating and uncomfortable that it becomes even more intriguing. It pushed me so far away that there was no further to go from it and nothing else worth paying attention to because of its originality; I had to return, learning to adapt to the sterile environment that was born onstage.

Accelerate as a whole is exhilarating and captivating. There are some overlapping choreographic styles and technological similarities that become monotonous, but those moments are broken up by other moments of daring originality. I hope that the pieces debuted this weekend will live on in the future as premonitions of what’s to come during new RW seasons.