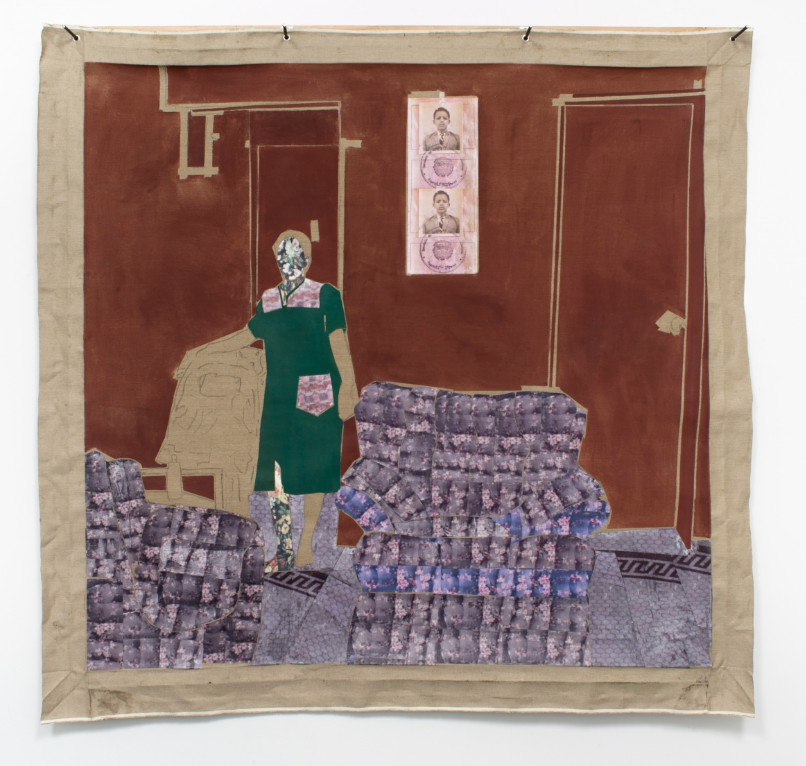 A linen print tacked to the gallery wall beckons our gaze with its earth-colored, vertically-configured shapes. At proximity, the planes of color converge with bold, textured patterns and strategically placed outlines that reveal the underlying canvas. Immersed in the scene is a standing figure — a maid — facing us as one arm is draped over her cleaning cart. Tacked behind her on a wall are two passport-style photos replete with official-government-issue-style stamps, denoting a migration for the young boy whose image is captured in the photos. The maid’s dress is vibrant green, adorned with pockets and collars of bright patterns. Even though the figure’s face and leg are comprised of floral patterns, one can feel her gaze pointed directly at us. In front of the maid stand two large chairs, similar in hue to the patterned floor beneath them. This piece, entitled “All Her Children,” is impossible to shake once seen, notable not just for what it represents, but what it suggests.

The artist is Bronx-native Genesis Jerez, a Dominican-American painter and mixed-media artist who maps out complex domestic imagery on large, unstretched linen canvases. Notable in her practice is the use of lively textiles, which oscillate in patterns and intensity. Jerez replaces integral components of her canvases—human bodies, furniture—with such textiles, inviting us to ponder the emotive connotation behind this act of replacement and erasure. Her canvases are massive in scale and confidently “unruly” in their refusal to be cleanly displayed in frames. The Utah Museum of Contemporary Art is home to her latest exhibition, Her Maiden Name. 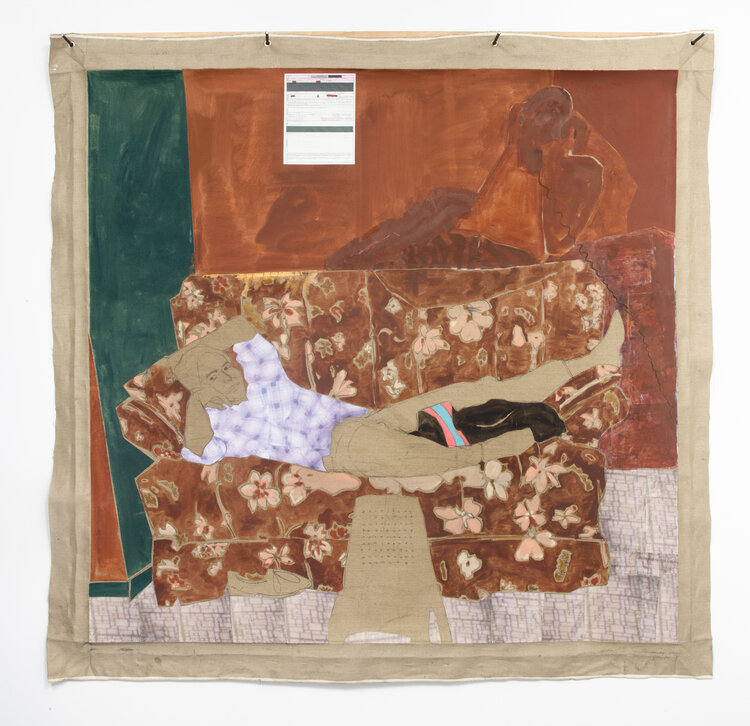 Using her family’s photographs as source material, Jerez “reconstructs domestic interiors to re-examine her early experiences growing up in New York City’s public housing projects,” according to an April 2021 UMOCA press release. Jerez’ “Watching Over Her,” depicts a figure lounging on a couch adorned with floral patterns. Outlines and minimal mark-making delineate the facial features of the figures, as well as his pants and a single shoe left in front of the couch. A seemingly banal scene is rendered more intriguing by the inclusion of a paper tacked on the back of the wall, which upon closer inspection is a “domestic incident report.” Such juxtaposition evidences the way in which familial demons permeate even the most ordinary moments, always lurking somewhere in our periphery.

Indeed, Jerez’ work forces a careful evaluation of the interiors they depict, revealing at once the sentimental and familiar, but also the uncanny tension which lurks in such spaces. She uses negative space and purposefully arranged pattern motifs to visualize the “space in between” us — that which is felt but not always acknowledged. In a tacit acknowledgment of this haunting quality, the works dominate the gallery walls in which they’re placed, unabashed in their fraying edges or the wrinkled linen that betrays the tough and tactile materiality for which Jerez seemingly relishes. 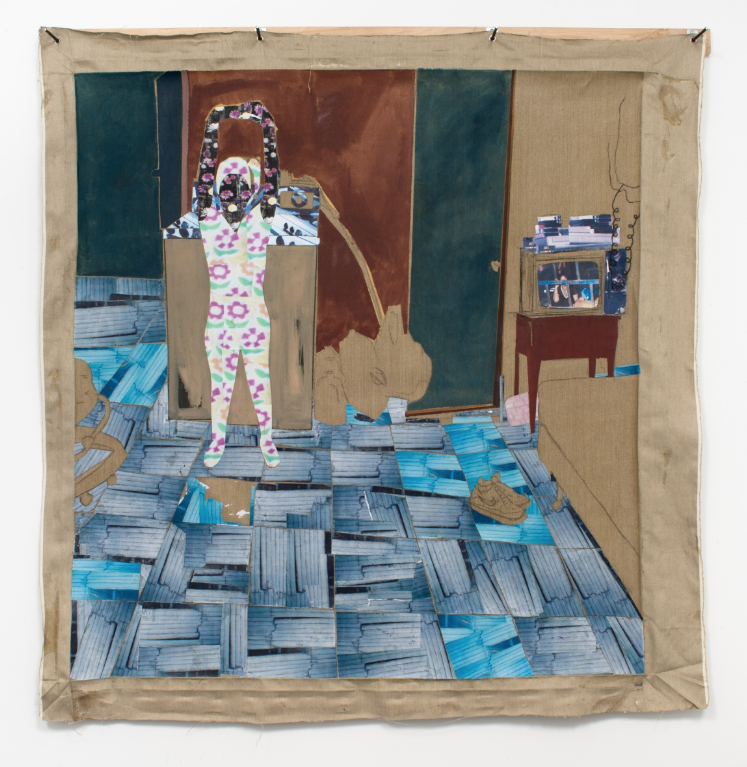 A spectral quality pervades these scenes, as the phenomenological tension between the figure and the environment depicted is a palpable force throughout the body of works. The works simultaneously force a close viewing — to reveal the intricacies of the materials used and the penciled outlines — and an alternative gestalt-like distance to see the full picture.

Works such as “Fridge” (2021), and “Blue Ballerina” (2021) reveal a fascinating interplay between positive and negative space, evidenced by pattern-filled sections with exposed sections of the canvas and minimal penciled-outline. The chemistry between these vibrant sections of the canvas and those that are “exposed” mimics the nature of memory itself. Indeed, those pockets of remembrance come to us in a bold flood, graspable only in their boldest contours. Rather than obscuring the vibrancy of her figures, the act of masking heightens their intrigue — inviting us to contemplate both the physical and emotional space occupied by those around us.

Jerez, a 2020-2021 Artist in Residence at the Studio Museum in Harlem, is the recipient of the 2021 Jarvis and Constance Doctorow Family Foundation Prize for Contemporary Painting. The prize, presented in collaboration between the Doctorow Family Foundation and UMOCA, is awarded every two years and comes with an unrestricted cash prize of $15,000. Candidates for the Doctorow Prize are often nominated by artists, scholars, curators, and cultural figures, and are then vetted by a committee of jurors who then reach out to artists who appear particularly intriguing based on a set of categories—those who have a unique vision, advance contemporary painting, and demonstrate diversity and range in their practice. This year’s jurors included Andrew Alba (painter, Utah); Suzanne Larsen (artist and Executive Director of the Jarvis and Constance Doctorow Family Foundation, Utah); Nancy Rivera (artist and Visual Arts Program Manager at the Utah Division of Arts and Museums, Utah); Thuy-Van Vu (painter and Arts Administrator at Cornish College of the Arts, Washington); and Chase Westfall (painter and Curator of Student Exhibitions and Programs at The Anderson at Virginia Commonwealth University, Virginia). 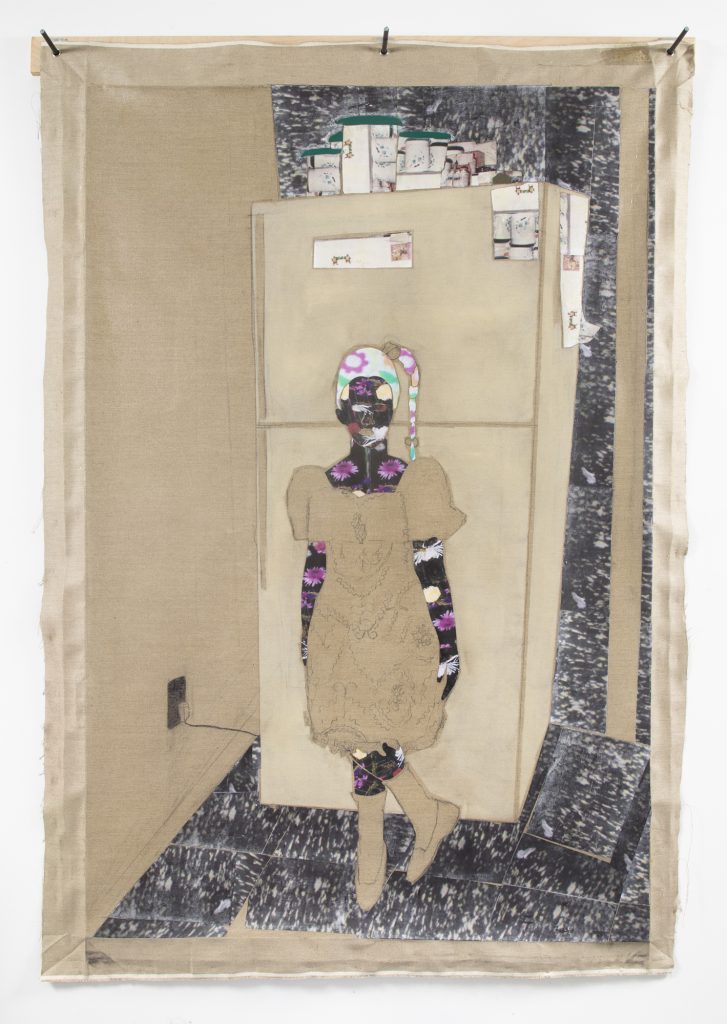 While the jurors independently scored Jerez favorably, they were pleasantly surprised to discover the artist was nominated by acclaimed curator and writer Legacy Russell, author of “Glitch Feminism.” Doctorow juror Nancy Rivera remembers her immediate impression of Jerez’ work: “We reviewed about twenty artists. Her work was not only technically impressive but very personal,” Rivera says. While prizes are a highly lauded commodity in the art world, the Doctorow jurors were keenly aware of what such an accolade could mean for an emerging artist. The jurors were also mindful of Utah’s continual aspiration to bring national and internationally recognized artists to the state. “I’m happy we have access to artists through this award, that we normally would not have in Utah,” Rivera said.

While representation is undoubtedly important, “diversity” statements are frequently siloed in tandem with a concerted effort by Utah’s electoral leaders to erase, diminish, and firebrand those who wish to teach a more accurate accounting of our state and nation’s history. Far too often, writers and political leaders — even and especially those in the cultural sector — opine about the “diversity” evidenced by a single event, as though bringing individuals from non-majority racial or ethnic groups to Utah for an exhibition at an area museum signals Utah’s growing cosmopolitanism. The role of artists, administrators, and institutions in elevating black, indigenous, and people of color (BIPOC) artists within Utah and bringing such artists to the state is a critical first step. What remains is for us in the ethnic majority — the writers and allies who genuinely wish to spur change — to refrain from using such events as a catalyst for complacency or to imagine a state of affairs in which the mere representation of non-white artists in Utah has resolved the state’s deep-seated reckoning.

Certainly Jerez’ work is a stage upon which various forms of reckoning may emerge — familial and class repression excavated and dominated through the visual field.