Now that 15 bytes is back, I have been wondering if Artists of Utah will also be getting back to exhibitions — like their 35 x 35 in December of 2002, which I enjoyed very much. Editor Shawn Rossiter has assured me that AoU is eager to be involved in exhibitions, “as long as they are ‘unique’” he said. “Which means no one else is doing them. And they can’t be too much of a drain on our core missions.””

That seems like an undertaking for someone with better writing skills and more time. But I did find out that there are a couple of the 35 x 35 artists exhibiting this month, so here is a start to that project.

Photographer Kim Riley won a juror’s award at 35 x 35. She works at Salt Lake City’s Phillips Gallery and travels often, finding inspiration for her photographs. An exhibition of her recent photographic work will be opening in the Dibble Gallery at Phillips March 18th.

Riley says that the exhibit was originally planned to show work from a two-month stay in France this past year. But a number of other images have crept in, including some from Spain, New York, and the Burning Man Festival in Paris.

The eclecticism of the shots might lead the show into a chaos of themes and styles, but it seems that her work, where ever shot, shares some thematic and stylistic qualities. 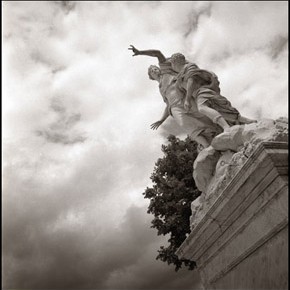 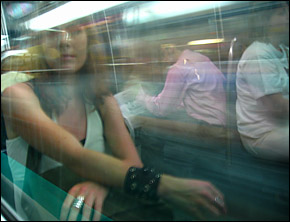 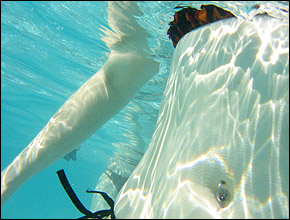 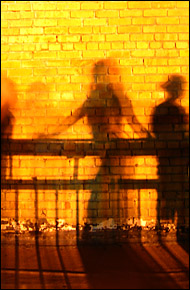 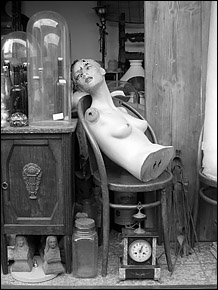 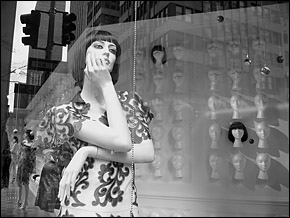 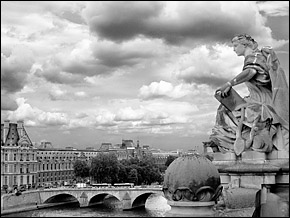 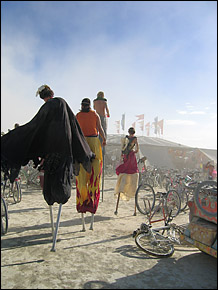 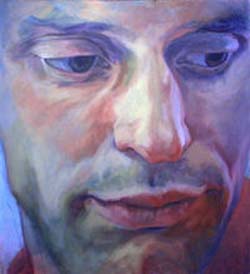 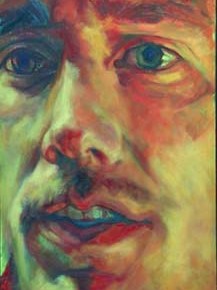 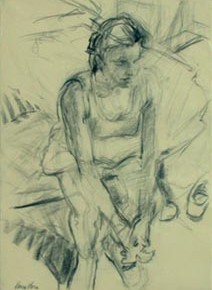 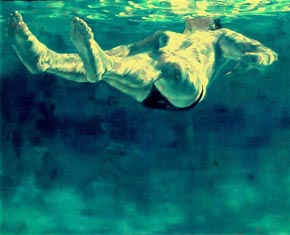 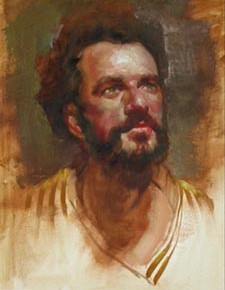 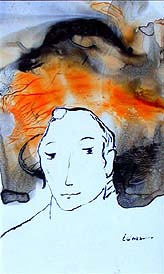 Multiple works in the exhibit were shot in the Paris subway; parts of the images are blurred due to the movement of the train; in others, the faces of passengers are seen through the glass(2). Surprisingly, these images share a feel with images as far away as Spain, where an underwater shot creates the same play of reflection as the subway windows (3), and the Burning Man Festival in Nevada, where one image shows shadows seen on a wall near Area 51 (4).

What most of these images seem to have in common is a spirit of introspection. I think traveling is not so much about seeing the world but about seeing yourself. You go away from home and yourself so that you can understand yourself and your home. This is what I think Riley achieves in this exhibition.

The armless top half of a mannequin, propped on a stool in a Paris antique shop, has a soulful look about her (5). The mannequin stares into large reflective glass. Is she remembering her past glory days? Another mannequin that Riley captures in New York has a pensive look (6). She seems a dreamer, wondering what life holds for her. Rows of mannequin heads can be seen in a window behind her, as if they are the choices of the woman she can become. In a shot of the Musee D’Orsay, we see a classical figure overlooking the city (7); in the Pere Lachaise cemetery, a time-worn statue bows its head in grief. The Burning Man photographs, in a drastically different climate, give off the same sense of introspection and search for meaning. In one, small figures are seen watching the burning of an effigy, symbolizing the release of desire. In another, stilt walkers are seen heading towards a hazy, flag strewn hill, as if on a pilgrimage to another life(8).

Most of these works were shot with a digital camera, though some were also done with a medium format. None have been touched up with Photoshop. They are what Riley saw and decided to capture. She seems to have a natural capacity for capturing surface and layers in a variety of subject and in a variety of locales. Though she takes us to Paris, New York and Nevada, we are not so much seeing these locales as we are seeing with her eyes. These are not the shots of a vacationing tourist but of the traveler looking for herself in her surroundings.

Jennifer Suflita, now showing in a group exhibit at Horne Fine Art, shares a similar introspective quality with Riley, though hers is more directly manifested. Suflita first came to the attention of gallery director Karen Horne when she viewed her work at Artists of Utah’ 35 x 35 exhibition. Horne describes her as “a petite person, with a soft, light voice — but her outsize paintings pack a wallop!”

Suflita’s “wallop” paintings are usually very large close-ups of faces, close-cropped by the canvas dimensions. The composition allows little clue to the light source in the painting, but the faces always seem to be in interiors, lit by the afternoon sun coming in through the window or by the warm glow of a fire or candle (10), or the harsh light of an overhead fluorescent bulb. This setting stages nicely the reflective nature of the sitters, who are most often seen looking away, introspectively.

The poses sometimes look like they might be too much of a put-on, but I think Suflita’s loving touch to the contours of the twenty-something faces and the attention to detail and emotion are able to create a sense of intimacy; almost as if these were stolen moments between two friends or lovers trying to work out their problems.

Suflita will also be exhibiting etchings done in the same vein. Her painting technique makes an easy transition to the expressive mode of etchings.

Suflita’s introspective, reflective pieces, reflect the general theme of “Body and Soul,” Horne Fine Art’s thematic show this month. The show’s purpose is to not only highlight the figure but also the expressiveness of the human figure. “We’ve included work that is compelling physically, but also spirited, not dry and academic,” says Horne.

Horne’s own drawing of a seated figure (11) reiterates the reflective quality of Suflita’s paintings, but with less unease. Jamie Wayman’s view of a floating figure in water evokes the emotional calmness of the “model” without ever showing the face (12). The exhibit shows a range of styles and responses to the figure, from Doug Braithwaite’s watercolors, one of a forthrightly pregnant nude, to the watercolors of Traci O’Very Covey, which uses the figure more symbolically to express sunlight or other elemental qualities. The work can be done in a realistic manner, as in Wilson J. Ong’s work (13), or in a more fanciful, poetic way as in the work of now 95 year old Ted Wassmer (14). Other artists participating include Ken Baxter, and Nathan Barnes.