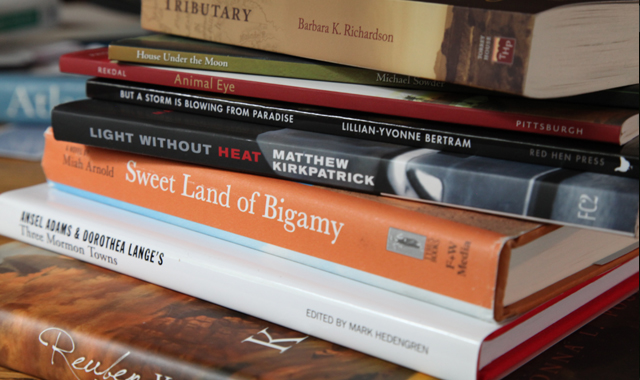 In May, we announced the formation of the 15 Bytes Book Awards, an annual program to celebrate the best Utah books in Fiction, Poetry and Art. After spending the summer reading all the nominees, our jurors have come up with three finalists in each category.

This year’s nominees for the 15 Bytes Book Awards were juried by members of the 15 Bytes staff. Later this month, we will be announcing the winners, who will receive a modest cash award.

To be eligible for the 15 Bytes Book Award, a nominated book had to be written by a Utah author and/or have a Utah theme or setting; be published in 2012; be professionally published and bound, and assigned an ISBN. Books were eligible in three categories: Fiction (50,000 words minimum), Poetry (48 pages minimum), Art books (20 page minimum).

A black comedy from Miah Arnold, who grew up in a house attached to the Three Legged Dog Saloon in Myton, Utah and is the daughter of the late Tribune arts writer and dance critic Helen Forsberg, this debut novel chronicles the life of Helen Motes, a middle-class transplant to Houston, Texas who finds herself married to two men: first husband Larry, off to war in Iraq, and the exotic Chakor Desai, poet in residence in the rural Utah town Motes grew up in. How Motes became a bigamist, and the choice she must face when Larry returns from Iraq, drive the drama of this charming novel.

Light Without Heat, stories by Matthew Kirkpatrick, published by The University of Alabama Press.

In his first collection of stories, the University of Utah graduate experiments with form to dazzling effect. Diagrams, family histories, lists of words and interlaced narratives explore the nature of memory, workplace malaise, and the fringes of consciousness where dreams become psychosis. No two stories are alike, and they must be delved into, peeled apart and soaked in to be understood.

Richardson’s epic novel tells the story of Clair Martin, an orphaned Mormon girl in nineteenth-century Utah who journeys to the American South and back again on an epic journey to find her identity in a world of bigotry, closed communities and fixed feminine roles.

But a Storm Is Blowing From Paradise by Lillian-Yvonne Bertram, published by Red Hen Press.

A collection of poems both lyrical and experimental by the winner of the 2010 Benjamin Saltman Poetry Award. These poems, rooted in the American West and tinged with the threatening storm of the collection’s title, explore love, desire, identity and loss with an uncommon linguistic zeal.
>>Sugar House Reviews review

Animal Eye by Paisley Rekdal, published by the University of Pittsburgh Press.

Rekdal’s newest is a vivid and complex collection of poems full of compassion and wonder. From evocative pastorals to fully developed narratives, the collection explores the small violences of our condition with a refreshing warmth that discovers the beauty behind cruelty.

House Under the Moon by Michael Sowder, published by Truman State University Press.

Sowder’s second collection of poems offers up a spiritual journey rooted in the physical world. Delivered in transcendent, lyric verse, these poems search for enlightenment along journeys of everyday activities: hiking, child-care, housekeeping.

Poulton’s book is a groundbreaking volume on this Utah artist of the pioneer period who found success with his large-scale panoramas depicting historical and religious subjects designed as traveling attractions. Excellently researched and with a generous helping of reproductions of the artist’s work, the book points the way for future volumes on the state’s lesser-known artists.
>> our review

Whereas Poulton’s volume on Reuben Kirkham served to reveal an unknown artist, this Gibbs Smith publication aims to be the defining work on one of Utah’s most popular artists, and succeeds admirably. Elegantly designed by Ron Stucki, and with varying takes on the artist by the volume’s authors, the work proves to be a mesmerizing page turner.
>>our review

Ansel Adams & Dorothea Lange’s Three Mormon Towns, edited by Mark Hedengren with an essay by Senator Harry Reid and images by Adams and Lange. Published by the Utah Arts Council.

Adams and Lange’s photographic essays of three towns in southern Utah, published in Life magazine in 1954, gave the country its most lasting image of Mormon communities at mid-century. This elegant publication by the Utah Arts Council brings together the original photographs with an essay by Senator Harry Reid and a foreword by Mary Ellen Mark. Editor Mark Hedengren, a professional photographer, revisited the same towns in the 21st century and includes a selection of these photographs at the end of the book, showing how much and how little has changed in these three Utah towns.

The 15 Bytes Book Award will continue in 2014 and honor books published in 2013. Next year’s finalists will be announced in the spring.